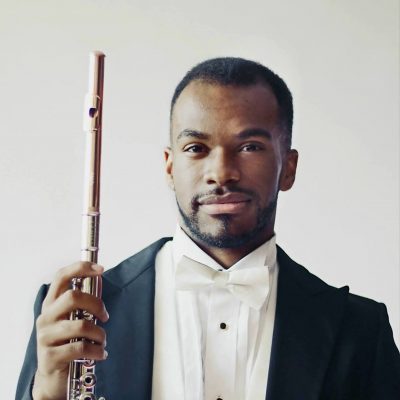 Adam has received awards and recognition in competitions from organizations including From the Top, Tal Perkes Flute Competition, U.S. Army Band “Pershing’s Own”, YoungArts, National Association of Negro Musicians, the Houston Symphony League, and others.

Adam is passionate about music education as he is about performing. He was an intern at the Eastman Community Music School during the 2017-2018 academic year where he taught private lessons and coordinated the Practice Buddies Program. Prior to that, he held an instructor position at the Baylor Flute Seminar and the Southeast Asia Music Festival. He is currently a teacher through the Detroit Symphony Orchestra’s Civic Youth Ensembles Lesson Program.

Adam holds a Bachelor of Music in Flute Performance and a Performer’s Certificate from the Eastman School of Music. Adam is wholly indebted to all of his teachers including Bonita Boyd, Anne Harrow, Jennifer Keeney, Jeff Zook, Amanda Blaikie, and Sharon Sparrow.