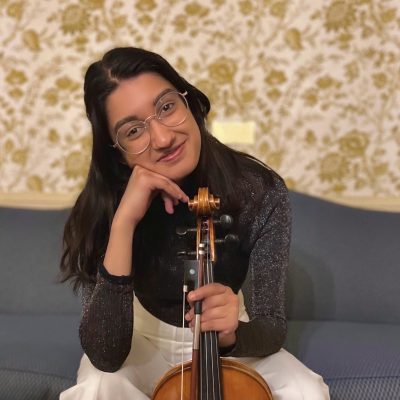 Originally from the Chicagoland area, violist Aditi Prakash is an avid performer of musical styles across cultures and time and a scholar of a diverse range of subjects, including public health, economic anthropology, and linguistic anthropology. She received her undergraduate degrees in performance at the Eastman School of Music and in anthropology at the University of Rochester. Prakash was a Lois L. Rogers Scholar at Eastman and she received the Robert L. Oppelt Viola Award as well as a Performer’s Certificate, which recognizes outstanding performing ability. In 2019, she had the opportunity to perform Bartok’s Viola Concerto with the Eastman School Symphony Orchestra. In previous summers, Prakash has attended the Aspen Music Festival, the Colorado College Music Festival, and the Chautauqua Musical Festival.

As a chamber musician, Prakash has performed both nationally and internationally at the Kennedy Center in Washington, D.C. as well as venues in New York City, Boston, Athens, and Havana. Most recently, she was featured on the series Morning Chamber Music at Eastman, where she performed the Mendelssohn Octet with Renee Jolles, Curtis Stewart, and members of the Ying Quartet. Reaching audiences who vary in accessibility and experience is especially important to Prakash; she has enjoyed performing with organizations such as the Central Union Mission in Washington, D.C., and as part of Representation Matters, a program created by Eastman students to present music of underrepresented composers in Rochester schools.

Prakash is particularly invested in contemporary music. Her most recent project is a collaborative commission and premiere titled “Voice and Variance” for solo viola and electronics with Varun Rangaswamy, which brings together sounds influenced by Indian Classical style and the dynamic capabilities of a performer’s mind and body. Outside of music, she enjoys spending time with her cat, Ginny, playing video and board games, and writing.