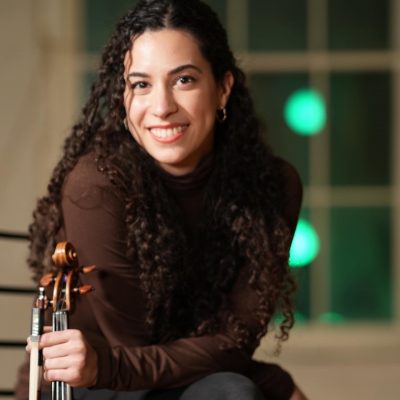 Award winning Toronto-based violinist Alessia Disimino is recognized for her thoughtful musicality and instinctive interpretations. Described as “one of Toronto’s finest violinists” (Snapd Beaches/Danforth), she is the co-founder and violinist of the Bedford Trio, concertmaster of the North York Concert Orchestra, and founder and Director of Strings at the North York String Academy, where she teaches the violin on a private and group class basis and curates the violin program. Alessia is a graduate of the University of Toronto’s Master of Music in Performance as a scholarship student of Dr. Timothy Ying, and also obtained her Bachelor of Music in Performance and a Minor in English, with Annalee Patipatanakoon of the Gryphon Trio.

Alessia has performed extensively as a chamber musician and soloist, and is the recipient of numerous awards. She has appeared as soloist with the North York Concert Orchestra and the Toronto Concert Orchestra, and with the Bedford Trio, has concertized across Ontario, Canada and competed internationally. In 2018, the Bedford Trio was announced as the inaugural Irene R. Miller Piano Trio Residency ensemble at the University of Toronto, and is currently the sessional artist-in-residence for the yearly Piano Trio Composition Competition held at UofT since 2021. The Trio was one of only two ensembles invited to participate in Toronto Summer Music Festival (2019) as chamber music fellows, where they worked side by side with renowned artists such as the members of the New Orford String Quartet and the Dover Quartet, Barry Shiffman, Yegor Dyachkov, and Desmond Hoebig.

With the Bedford Trio, Alessia was a finalist in the Anton Rubinstein Chamber Music Competition in Dusseldorf, Germany (2018), a recipient of Ottawa Chamberfest’s 2018 Career Development Residency, and has been featured at the Sony Centre (Xenia Concerts), the Faculty of Music’s “Thursdays at Noon” recital series, and Toronto’s LISTEN UP! outreach and educational programme in Etobicoke. The group supports and champions new music, and curates a yearly recital series in Toronto featuring the masterworks of the piano trio repertoire alongside new and emerging compositions. During her time at the University of Toronto, Alessia served as concertmaster of the University of Toronto Orchestra and Opera, and has studied with esteemed artists Jonathan Crow, Andrew Wan, Erika Raum, Mark Fewer, Jeanne Lamon, Lara St. John, Gryphon Trio, Rob Kapilow, Menahem Pressler, and the Juilliard String Quartet, among others.

A recipient of numerous awards, Alessia was awarded the Gordon Cressy Leadership Award for her extracurricular contributions to her community and to the University, and also received an Ontario Graduate Scholarship (2017). Previous awards include Gerhard Kander Graduating Award for Violin, the Suba Institute Award for Performing Excellence, the Felix Galimir Award for Excellence in Chamber Music (2015), and the Women’s Musical Club of Toronto Centennial Scholarship (2014). Alessia holds her Associate of the Royal Conservatory of Toronto (ARCT) in Violin Performance, is an alumnus of the RCM’s Young Artist’s Performance Academy and the Toronto Symphony Youth Orchestra, and has attended summer study programs including the Tafelmusik Baroque Summer Institute, the Orford Academy, and the Domaine Forget Academy. Equally passionate about education and community outreach, Alessia has also attended the University of Toronto Wind Conducting Symposium and the Indiana University Violin and Viola Teacher Retreat for her pedagogical training. Alessia is thrilled to be joining Bowdoin International Music Festival this summer as a Festival Fellow.