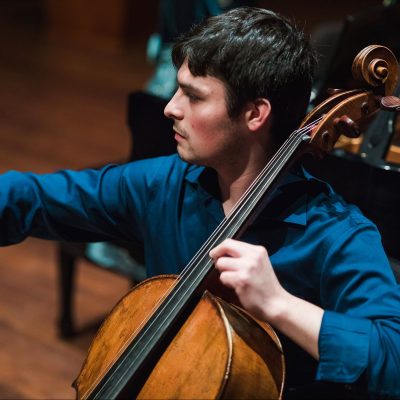 Honduran-Venezuelan cellist Andres Sanchez, born in Allentown, PA, began his cello studies at the age of eight under the wing of current Puerto Rico symphony cello principle Miguel Rojas. After two years, he moved his studies to the cello studio of Jesus Morales, cellist of the Dali Quartet and past principle of the Puerto Rico Symphony. At age 10, Andres made his first solo debuts with the Midwest Clinic of Chicago and the Ocean City Pops Orchestra, which was followed by his Carnegie Hall debut alongside the Arconet Chamber Orchestra three years later.   Andres has also appeared as a soloist with the Kutztown Univeristy Chamber Orchestra, Kennet Square Symphony, Central Jersey Symphony, and the Summit Symphony. This year Andres will appear as a soloist with the PA Sinfonia and with the Waterbury Symphony as part of the AYA Trio Beethoven Triple Concerto. Andres is a graduate of the Curtis Institute of Music where he studied with cellist Peter Wiley and Carter Brey.

Andres served as the associate principal cellist of the Curtis Symphony Orchestra and as principle of the Curtis Opera Orchestra during the 2016-17 season, and during Curtis on Tour, Andres played at Berlin’s Konzerthaus, Helsinki’s Musiikkitalo, Dresdner Philarmonie, and Weiner Concert Hall.

Also an avid chamber musician, Andres has performed in over 30 chamber music concerts in the Curtis Student Recital Series. As cellist of the AYA trio, he will be performing chamber across the country in locations such as Memphis, TN; New York, NY; Waterbury, CT; and Washington, DC. The trio recently performed in Concerts International Series and Schneider Concert Series. In April they attended the the Chesapeake chamber music competition. The AYA trio is represented by Jean Schreiber Deutsch of Jean Schreiber Management.

Andres has appeared in Curtis master classes with cellists Marcy Rosen, Colin Carr, Timothy Eddy. At the 2015 Banff Center Master Class Program, he studied with Andres Díaz, Raphael Walfisch, and Denis Brott, and at the 2016 Music From Angel Fire Festival he performed alongside Ida Kavafian, Peter Wiley, Steven Tenenbom, and Ani Kavafian. In 2018 Andres attended the Great Lakes Chamber Music Festival where he played with and was coached by the esteemed artists of the Emerson Quartet including Philip Setzer and Paul Watkins. Andres has also participated in the Hefietz Institute, where he took part in master classes with cellists Franz Helmerson and Yeesun Kim.