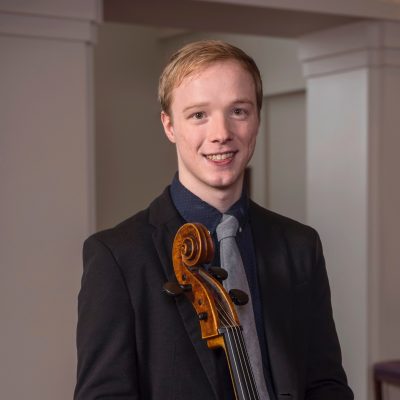 Originally from the Boston area, cellist Andrew Laven will graduate in May 2019 with his Master of Music degree from Rice University’s Shepherd School of Music as a student of Desmond Hoebig. Mr. Laven graduated from the Eastman School of Music in May 2017, receiving his Bachelor of Music Degree with a Performance Certificate from the studio of Steven Doane and Rosemary Elliott. While at Eastman, he was very active in chamber music and co-founded the Capra Quartet which, in the summer of 2018, was in residence at Avaloch Farm Music Institute. He has also participated in chamber masterclasses for Peter Serkin, Peter Oundjian, and the Ying, Brentano, Jerusalem, and Dover Quartets.

Mr. Laven has extensive orchestral experience. In addition to rotating as Principal Cellist of the Shepherd School Symphony Orchestra, Shepherd School Chamber Orchestra, and Eastman Philharmonia, he has also performed in concerts as a substitute with the Houston Grand Opera, Rochester Philharmonic Orchestra, and the New World Symphony. For the summers of 2015-17, he was a fellow of the Tanglewood Music Center and, in those three summers, played under conductors including Andris Nelsons, Charles Dutoit, Stéphane Denéve, Michael Tilson-Thomas, Jaques Lacombe, Ken-David Masur, Thomas Adés, Bramwell Tovey, and Stefan Asbury. In the summer of 2016, Mr. Laven was the recipient of the Karl Zeise Memorial Cello award and, during the following summer, he had the privilege of playing in private coachings for Yo-Yo Ma and Emanuel Ax in preparation for a performance of Brahms’ Piano Trio in C Major.

In the spring of 2018, Mr. Laven was chosen to participate in the New York Philharmonic Global Academy, where he spent 10 days performing and studying with Philharmonic musicians, including principal cellist Carter Brey and violinist Fiona Simon. In the summer of 2018, he performed in the Spoleto Festival USA and traveled to Europe to study with former Berlin Philharmonic principal Wolfgang Boettcher at the Carl Flesch Akadmie in Baden-Baden, Germany.  While in Baden-Baden, he was selected to perform the first movement of Schumann’s Cello Concerto with the Philharmonie Baden-Baden. Later that summer he had the unique opportunity to serve as the rehearsal cellist for Yo-Yo Ma for the world premier of John Williams’ new work, “Highwood’s Ghost” for cello, harp, and orchestra with Boston Symphony principal harpist Jessica Zhou and the Tanglewood Music Center Orchestra conducted by Andris Nelsons.

Mr. Laven will begin his position as the newly appointed Assistant Principal Cellist of the Grand Rapids Symphony Orchestra in September 2019 with music director Marcelo Lehninger.