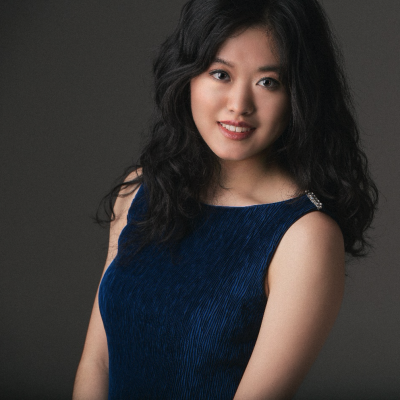 Recognized as an inquisitive and authentic musician, Angie Zhang is a unique 21st-century American artist, dedicated to the modern piano and fortepiano alike, who has boldly expanded her creative footprint to encompass conducting from the piano and entrepreneurial projects. Praised as “warmly expressive, sensitive, and polished” as well as “a valuable advocate for classical music” by New York Concert Review, she has appeared in diverse venues including the Kennedy Center, LA County Museum of Art (LACMA), and the Metropolitan Club. Angie combines a decorated performance career with a focus on arts activism and interdisciplinary collaboration, and is one of a few concert pianists to win the Peter Mennin Prize for Outstanding Achievement and Leadership in Music. She has won major prizes in international competitions, received grants and fellowships from an array of institutions, and is also a rare three-time winner of the Juilliard Concerto Competition.

Angie has been invited by and worked with some of the world’s leading conductors and artists, including Anne-Marie McDermott, Jeffrey Kahane, and Fabio Luisi. A seasoned soloist with orchestra, Angie made her debut at the age of 10 under Grammy-nominated conductor Niel DePonte, and was quickly thereafter engaged with the Olympia Symphony Orchestra under Huw Edwards, with whom she has collaborated with almost ten times. She has since performed with orchestras including the National Symphony Orchestra of the Dominican Republic, Juilliard Orchestra, Juilliard Chamber Orchestra, Indianapolis Chamber Orchestra, and Milwaukee Symphony Orchestra. Her sold-out performance at Alice Tully Hall (NYC) of Mozart’s Piano Concerto No. 21 under Fabio Luisi, was followed by her conducting debut at the piano of Mozart’s Piano Concerto No. 9 with the Juilliard Chamber Orchestra.

As an educator, Angie is the youngest Juilliard student to hold concurrent teaching responsibilities in the pre-college, college, and evening divisions. Her leadership efforts were recognized at Juilliard, as Chair of Student Council and one of twelve students selected for the Presidential Search Committee commissioned to appoint Joseph Polisi’s successor as President. Angie’s pedagogical talent has been recognized by some of the world’s leading educators, influencers, and international music festivals and she is currently in her seventh year of college teaching. She also maintains a private studio and is frequently sought after as a clinician and guest speaker.

Spending about equal time growing up first in Portland, OR, then in Princeton, NJ, she now resides in Ann Arbor, MI where she is pursuing a Doctor of Musical Arts in Piano Performance with Logan Skelton and a Master of Music in Fortepiano Performance with Matthew Bengtson at the University of Michigan. Angie completed her Bachelor of Music with Honors and Master of Music at The Juilliard School as a proud recipient of the Kovner Fellowship, studying with Yoheved Kaplinsky and Joseph Kalichstein. She is a Yamaha Artist.  Follow her on Instagram @angiezhangmusic and her Facebook page at https://www.facebook.com/angiezhangmusic/.