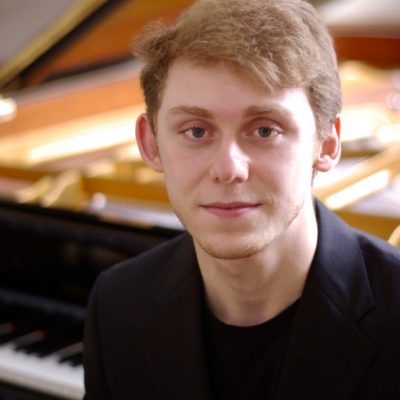 Anthony Ratinov began playing piano at the age of four under the teaching of his grandmother, Edit Ratinova, who taught at the renowned Gnessin Music School in Moscow, Russia for 45 years. Most recently, Anthony received the 1st prize at the 2021 Canada International Artists Piano Competition, and the Pianists’ Award (1st prize), sponsored by Bösendorfer, at the International Summer Academy in Austria in 2019. He also was a semi-finalist at the 2021 Concert Artists Guild Competition, and captured the 3rd prize at the Virtuoso & Belcanto piano competition in Italy in 2017, the 1st prize at the Maryland MTNA Piano Competition in 2009, and the 2nd prize at the International Chopin Competition in Hartford, CT in 2012. Anthony is the recipient of several music scholarships, including the Evelyn Bonar Storrs Piano Scholarship and the R. J. R. Cohen Fellowship for Musical Performance Studies, and was awarded the Wrexham Prize in Music by the Yale Department of Music in 2020. In addition to many fundraising concerts in the New England area, Anthony has performed at the Kennedy Center for Performing Arts in Washington D.C., the ORF RadioKulturhaus performance hall in Vienna, as well as at other venues across Italy, the Netherlands, and Austria.

Anthony studied at Yale University, where he majored in chemical engineering and graduated with honors. Anthony is currently a masters student at the Yale School of Music, studying with Professor Boris Berman and Professor Wei-Yi Yang. He loves exploring chamber music repertoire, and participating in various musical projects and collaborations. This past year, Anthony has played and performed as part of several violin-piano duos, a piano quartet, and a percussion-piano quartet – while often embracing the virtual platform for online concerts and volunteer opportunities. Anthony has also performed in master classes of such notable teachers and performers as Boris Slutsky, Mikhail Voskresensky, Roberto Prosseda, Marian Hahn, Ian Jones, Yejin Gil, and Gottlieb Wallisch.