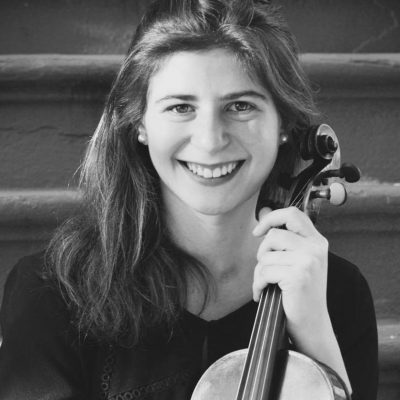 Becca Kasdan began her violin studies at the age of five. A Massachusetts resident, Becca studied for ten years at the New England Conservatory Preparatory Program with Magdalena Richter, Anait Arutunian, and David Rubinstein. In 2012, Becca toured Argentina with the NEC Youth Philharmonic Orchestra under the baton of Hugh Wolff. The following year she became a member of Benjamin Zander’s Boston Philharmonic Youth Orchestra and went on tour to Carnegie Hall.

Becca currently studies with Violaine Melancon and is pursuing her Master’s Degree in Violin Performance at the Schulich School of Music of McGill University. Becca is an alumna of the Peabody Institute of Johns Hopkins University where she served as Co-Concertmaster of the Peabody Concert Orchestra, Concertmaster of the Peabody Modern Orchestra, and Principal of the Peabody Chamber Orchestra and Opera Orchestra. Deeply passionate about chamber music, Becca has worked closely with members of the Juilliard, Emerson, Chiara, Orion, Brentano, and Borromeo String Quartets among others. Her string quartet, the Vernon Quartet, was selected as Peabody’s only Honors Ensemble for the 2017-2018 academic year. Her quartet performed at the Society of Four Arts in Florida and had the pleasure of performing with former cellist of the Brentano String Quartet, Michael Kannen. She has performed in masterclasses for several distinguished artists including Midori Goto, Axel Strauss, and Stefan Milenkovich, toured Germany and Austria as a chamber musician, and has attended many prestigious summer music festivals including the Manchester Music Festival and the Heifetz Institute. Becca has also served as a faculty member at the Easton Music Festival in Massachusetts.

In addition, Becca is extremely devoted to bringing music into the community. She served as the first Co-Director of the Peabody String Sinfonia, a conductor-less string ensemble at Peabody Conservatory that performs exclusively at community venues. She has also been on a discussion panel with Midori discussing community engagement and outreach in the 21st century. Becca Kasdan is the 2018 recipient of the Johns Hopkins President’s Commendation for Achievement in the Arts and the Grace Clagett Ranney Prize in Chamber Music.

This summer, Becca is thrilled to be part of the 2019 Bowdoin International Music Festival as a Fellow.