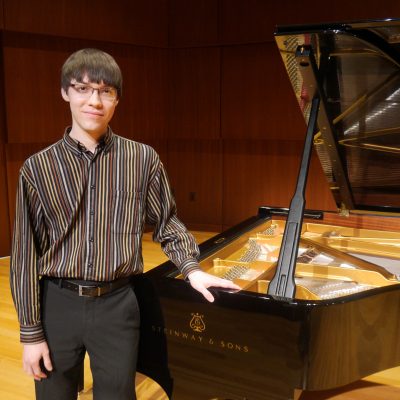 Pianist Benjamin Dominguez is a senior at the University of Kansas studying under Dr. Jack Winerock, international artist and former chair of the Piano Department. In 2016, Benjamin won the KC Symphony Young Artists Competition, giving two performances with conductor Michael Stern at the Kauffman Center for the Arts in Kansas City. In 2017, he won the Grand Prize at the Naftzger Young Artists Competition as well as joint First Prize in the KU Concerto Competition, giving a performance with conductor Jung-Ho Pak and the KU Symphony Orchestra. Most recently, Benjamin was the recipient of the 2018 Presser Scholar Award and Scholarship for outstanding achievement and grand prize winner of the 2019 KC SAI Scholarship Auditions. He has participated in masterclasses with internationally acclaimed artists including Robert McDonald, Matti Raekallio, Yo-Yo Ma, Martin Katz, Jon Nakamatsu, Boris Slutsky, Tang Zhe, Russel Miller, Alon Goldstein, and many others.

Benjamin has also been highly active in the Kansas area, giving solo performances at the Lied Center for the Performing Arts, Swarthout Recital Hall, the Hammert Building, and a variety of smaller venues throughout the state.

In summer of 2018, Benjamin was a participant of the Chautauqua Piano Festival held at the Chautauqua Institution in New York. He looks forward to attending the prestigious Art of the PianoFestival at CCM as a full scholarship fellow in May and early June, and the Bowdoin International Music Festival in Maine as a part of the highly esteemed Piano Fellowship program in June through August of this year.

Benjamin has been heavily involved in collaborative performances as a participant in the Catskill High Peaks Festival from 2014 to 2017 and retains a deep interest in both solo and collaborative piano. In 2018, he gave a series of recitals throughout Kansas with Uzbek cellist Sunnat Ibrahim, including in the Ruel Joyce artist series at JCCC, the Wakarusa artist series presented by the Hammert Building, on the air with Kansas Public Radio, and in recital at Pittsburgh State University. In the upcoming year, Mr. Ibrahim and Benjamin will again perform a variety of recitals in concert series throughout Pennsylvania and Kansas.