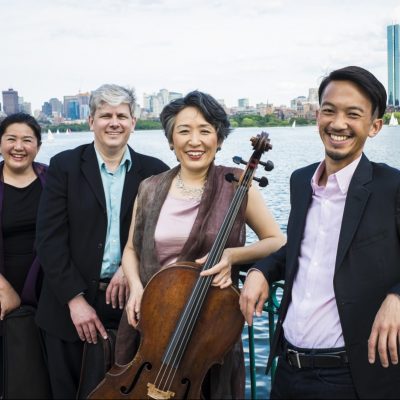 Each visionary performance of the award-winning Borromeo String Quartet strengthens and deepens its reputation as one of the most important ensembles of our time. Admired and sought after for both its fresh interpretations of the classical music canon and its championing of works by 20th and 21st century composers, the ensemble has been hailed for its “edge-of-the-seat performances,” by the Boston Globe, which called it “simply the best there is.”

Now celebrating its 25th anniversary, the Borromeo continues to be a pioneer in its use of technology, and has the trailblazing distinction of being the first string quartet to utilize laptop computers on the concert stage. Reading music this way helps push artistic boundaries, allowing the artists to perform solely from 4-part scores and composers’ manuscripts, a revealing and metamorphic experience which these dedicated musicians now teach to students around the world. As the New York Times noted, “The digital tide washing over society is lapping at the shores of classical music. The Borromeo players have embraced it in their daily musical lives like no other major chamber music group.”

Passionate educators, the Borromeos encourage audiences of all ages to explore and listen to both traditional and contemporary repertoire in new ways. The ensemble uses multi-media tools such as video projection to share the often surprising creative process behind some works, or to show graphically the elaborate architecture behind others. This produces delightfully refreshing viewpoints and has been a springboard for its acclaimed young people’s programs.