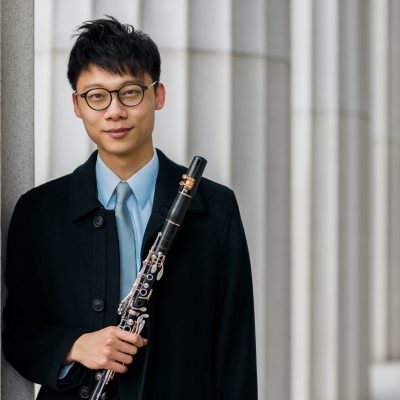 As soloist, Chao-Chih earned multiple opportunities to play concertos with orchestras around the country; two noteworthy pieces included ‘G. Rossini: Introduction, Theme and Variations’ and ‘W. A. Mozart: Clarinet Concerto in A major, KV. 622’. During a reception on Taiwan’s National Day, he was invited by the Ministry of Foreign Affairs to perform for the country’s president and other members within the government. He has received scholarship awards from the Taiwan Rotary Clubs Association and the Hsing Tian Kong Foundation.

As an orchestra and chamber musician, he was appointed principal for Manhattan School of Music’s symphony and band, as well as Taipei Youth Festival Orchestra. Other highlights include being invited to play with The Metamorphosis Chamber Orchestra, being selected as a fellow at the Sarasota Music festival, as well as winning top prize of Eslite Young Chamber Musician Competition, and The Lillian Fuchs Chamber Music Competition.

Aside from his professional experiences, Chao-Chih is interested in the psychology of human behavior, photography, and playing the saxophone. At the age of 12, he began earning his first paycheck to support himself through playing the saxophone as a street performer. He has also performed in multiple concerts, including ones for the country’s 228 Memorial day and the International Agriculture Exposition.

Chao-Chih is currently pursuing a master’s degree at the Manhattan School of Music. His major teachers are the world-famous clarinetist Charles Neidich and Ti Huang.