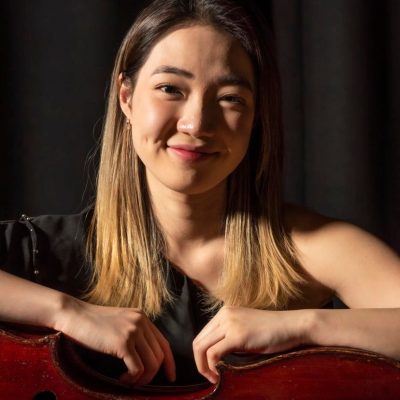 South Korean cellist Claire Deokyong Kim earned her Bachelor of Music degree at New England Conservatory in the studio of Lluis Claret and is now pursuing the master’s program in the studio of Laurence Lesser. Kim previously studied with Myungwha Chung for 4 years prior to studies at NEC.

As a first-year undergraduate, Kim won the NEC Lower String Competition and was subsequently selected to perform Shostakovich Cello Concerto No. 1 with the NEC Philharmonia Orchestra under Hugh Wolff at Jordan Hall. In 2018, she won the Tecchler-Forster Cello Competition in which she was awarded a Tecchler cello (1711) for a year.

Kim has won numerous competitions in Korea including the grand prize at the Seoul Arts Center Musical Prodigy Competition, Sungjung Competition, Strad Competition, Yejin Artist Music Competition, and Eumyeon Competition. She was the youngest competitor to win the Boroondara Eisteddfod Australia String Solo. As a soloist, Kim has performed many concerts, including her debut in the Kumho Foundation Prodigy Solo Concert in South Korea and Rising Star Concert at Great Mountains Music Festival. She has also performed with numerous orchestras such as the NEC Philharmonia Orchestra, Suwon Philharmonic Orchestra, Gangnam Orchestra, and Korean Symphony. In 2018, Kim performed a live concert on NPO radio 4 in Amsterdam.