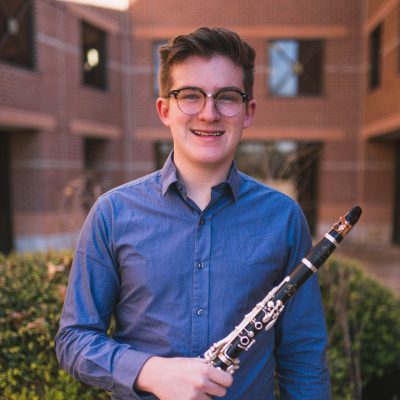 Originally from Oklahoma and raised in Texas, clarinetist Colby Bond holds a Bachelor of Music degree from the University of Colorado Boulder and is currently pursuing a Master of Music degree from the San Francisco Conservatory of Music. Recently appointed as 2nd Clarinet in the Fort Collins Symphony, Bond has appeared with the Boulder Philharmonic Orchestra, Cheyenne Symphony Orchestra, Boulder Chamber Orchestra, Longmont Symphony Orchestra, and has attended the Eastern and Aspen Music Festivals.

Having attended the Aspen Music Festival and School for two summers under the Louis and Harold Price Foundation Fellowship and Maestro’s Circle Scholarship, he has had the opportunity to collaborate with some of the top conductors and artists such as Alisa Weilerstein, Robert Spano, Ludovic Morlot, and more. Outside of orchestral playing, Bond has studied chamber music under master instrumentalists Elaine Douvas and Demarre McGill and has performed in a wide variety of chamber groups in numerous settings. He has also been a prizewinner in solo competitions such as the Aurora Symphony Young Artists Competition and CU Boulder Honors Competition, of which he won the undergraduate division this year. As a result of this success, he will be making his concerto debut performing the Copland Clarinet Concerto with the CU Symphony Orchestra in the fall. His principal teachers include Daniel Silver, Michael Rusinek, and Joaquin Valdepeñas.