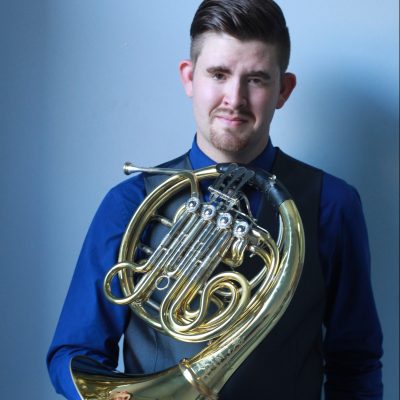 Cort Roberts, a motivated and thoughtful musician, is an active performer with an array of skills undergirding his advocacy for the performing arts. In addition to his experience as the principal horn in a Mexican orchestra and completing graduate studies at the Juilliard School, his résumé includes performance under the baton of world-renowned conductors at notable festivals. Cort is equally proud of his meaningful work as a teacher in a deeply underserved community.

In 2017, he completed his undergraduate studies at the University of Colorado Boulder under the tutelage of Michael Thornton. While studying music at CU Boulder, he took advantage of the diverse course offerings and set aside time to pursue and complete a rigorous minor in Business and an additional minor in Leadership Studies. Cort’s growing advocacy for the arts has included courses in Entrepreneurship, Business Planning, Finance, Marketing, Public Speaking, Leadership Theory, and Diversity/Inclusion — unusual skills for such a young and notable performer.

In 2016, Cort was appointed Principal Horn of La Orquesta Filarmonica de Sonora, in Sonora, Mexico. In addition to his capacity as Principal Horn, he taught music classes and private horn lessons on a weekly basis, in Spanish! Diving head first into a new culture with no experience speaking the language, he became fluent in a matter of months. After a rewarding season with the orchestra, he returned to Colorado and completed his undergraduate degree.

Cort is currently completing his Master of Music degree at The Juilliard School, where he studies privately with Julie Landsman and works closely with many world-renowned faculty including members of the American Brass Quintet, Timothy Eddy, Jon Manasse, and Carol Wincenc. During his time at Juilliard, Cort has worked with illustrious conductors Marin Alsop, Sir Mark Elder, Alan Gilbert, David Robertson and Emmanuel Villaume in distinguished venues including Carnegie Hall, Alice Tully, and David Geffen Hall.

He has been heard at many orchestral music festivals including Round Top Festival Institute, Festival Napa Valley’s Blackburn Music Academy, and the Colorado College Summer Music Festival. In 2016, after returning from Mexico, his horn quartet performed in Carnegie’s Weill Recital hall as part of CU Boulder’s inaugural showcase in the venue. Recently, he was invited to perform as an extra musician with the New World Symphony under the baton of Michael Tilson Thomas.

First discovering his passion and aptitude for teaching while in Mexico, Cort has continued to explore this area of his artistry. Currently, he holds a position as a Morse Teaching Fellow through The Juilliard School’s Office of Community Engagement. On a weekly basis, he works in a New York City public school to teach applied instrument and arts-integration lessons. Additionally, he is a fellow in the Music Advancement Program at Juilliard where he works with kids aged 12-18 as a mentor during ensemble rehearsals.

A devout musician and entrepreneurial thinker, Cort has developed a diverse range of experience and knowledge, believing that this era demands more than instrumental mastery. His work inspires him daily, and he is optimistic and excited about the future of the arts in his community, knowing he has a role to play.