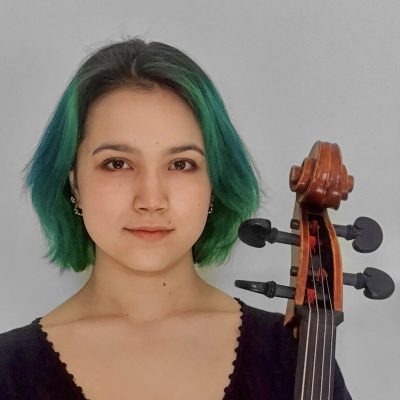 Dana Rath is a rising senior at the University of Michigan: School of Music, Theater, and Dance, and has been playing the cello since she was four years old. She currently studies with Richard Aaron and has previously studied with Daniel Veis, Martin Storey, and Julian Boren. Rath has been a member of the National Youth Orchestra of the United States of America on their 2016 European tour, conducted by Valery Gergiev and Christoph Eschenbach and accompanying pianists Emanuel Ax and Denis Matsuev, and was principal cellist of Michigan’s University Symphony Orchestra. She has received fellowships to attend the Detroit Symphony Orchestra Summer Institute, 2020; Center Stage Strings, 2019; Aspen Music Festival, 2018; and was awarded the Artistic Leadership Award Scholarship to attend the University of Michigan. In 2015, Rath won First Prize and Audience Favorite in the Kansas City Symphony’s Young Artist Competition, and this year she was awarded the Eugene Bossart Prize as a winner of the University of Michigan’s Undergraduate Concerto Competition. When Rath isn’t playing the cello, she enjoys cooking and drawing in her free time.