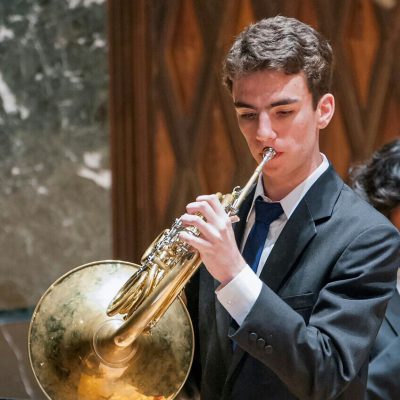 David Alexander studies horn at the Juilliard School, where he is a recipient of the school’s Kovner Fellowship. As an orchestral horn player, he has performed at festivals including the Colorado College Summer Music Festival, the National Symphony Orchestra’s Summer Music Institute, and the National Youth Orchestra USA. An avid chamber musician, Alexander has performed at the Kennedy Center’s Millennium Stage and Lincoln Center’s Alice Tully Hall as a founding member of the AES V Brass Quintet. He gave his solo debut with the Houston Brass Band at the Round Top Festival, and has since performed in recital at the Juilliard School and the Suffolk County Music Educator’s Association. Alexander’s principal teachers have included Julie Landsman, Michelle Baker, and Robert Johnson. Beginning his own teaching career, Alexander recently led a masterclass at the University of Houston’s Featured Alumni Guest Artist Masterclass Series, as well as presenting in Caruso Technique workshops at Juilliard Pre-College.