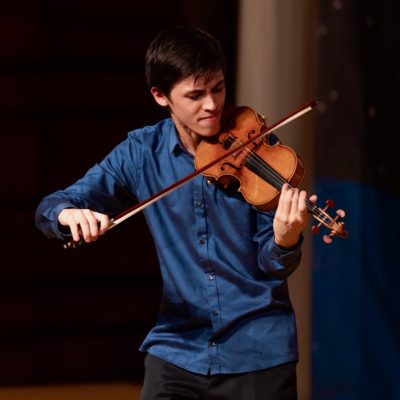 Violinist David Bernat is a Masters student at The Juilliard School, where he studies with Joseph Lin and Laurie Smukler, and is a graduate of the New England Conservatory, where he studied with Soovin Kim. He has performed at Carnegie Hall, the Kennedy Center, Tanglewood, and was recently featured on the BBC Radio 3 program, In Tune, and at WQXR’s Greene Space. As a soloist, David has performed concertos with the Ft. Dodge Symphony and Waterloo-Cedar Falls Symphony, and was a semi-finalist in the 2018 Hudson Valley String Competition.

David has attended Tanglewood Music Center, where he was concertmaster of the TMC Orchestra, Music Mountain Chamber Music Masterclasses, and Moritzburg Festival Academy, performing in masterclasses for artists such as Sarah Chang, Pamela Frank, Colin Carr, and members of the Juilliard, Borromeo, and Brentano String Quartets. He has also worked with conductors Andris Nelsons, Herbert Blomstedt, Ivan Fischer, Hugh Wolff, and Bramwell Tovey.

David continues to be committed to expanding community access to classical music and has twice been a fellow of New England Conservatory’s Community Performance and Partnerships program. He has shared his music at retirement communities, shelters, and hospitals throughout the Boston area and at the Women’s Lunch Place as part of Music for Food.