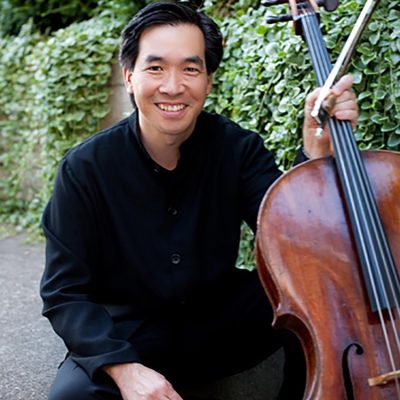 Cellist of the Grammy Award-winning Ying Quartet, Mr. Ying concertizes widely, both in traditional performances from Carnegie Hall to the Sydney Opera House, and in unusual presentations beyond the concert hall. The Quartet’s wide-ranging career and interests have led them to the White House as well as to juvenile prisons, and from farm towns to urban community centers. Their performing collaborators range from eminent musicians such as pianist Menahem Pressler, to folk musician Mike Seeger, to dancers, actors, magicians, computers and even Chinese chefs. Mr. Ying can also be heard on the Ying Quartet’s enthusiastically received recordings.

An avid teacher too, Mr. Ying serves on the faculty of the Eastman School of Music in Rochester, NY. During summers he often teaches at the Colorado College Summer Music Festival, and the Aspen Music Festival.

As solo cellist, he has been prizewinner in the Naumburg International Violincello Competition and the Washington International Competition. Mr. Ying has also been active as a recitalist with his wife, pianist Elinor Freer, and together they directed the Skaneateles Festival.

David Ying is the Co-Artistic Director of the Bowdoin International Music Festival.