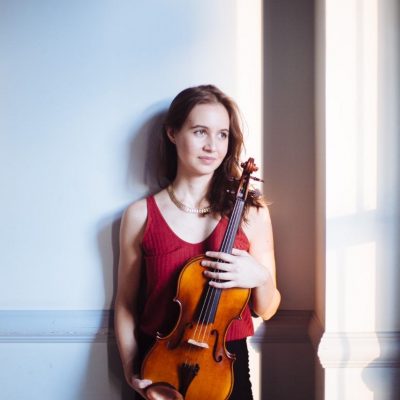 Chilean violist Georgina Rossi frequently pursues projects with a focus on modern and contemporary music, playing with chamber ensembles like New Juilliard and AXIOM, and has played alongside musicians such as Joel Sachs, Robert Langevin, and Daniel Barenboim. Recent solo engagements include debuts with the Orquesta Sinfónica Uncuyo, under the baton of Giovanni Guzzo, and with the Orquesta de Cámara de Chile, with conductor Alejandra Urrutia.

Passionate about Chilean music, Rossi gave the U.S. premiere of composer Rafael Díaz’s work for amplified solo viola in the Peter Jay Sharpe Theater, during the 2017 Focus! Festival in New York City. As part of her Argentinean debut, she premiered young composer David Cortés’s Tololo, for viola and orchestra.

Rossi began her viola studies with her mother, Penelope Knuth, and came to the United States at sixteen to study music in northern Michigan. After graduating from Interlochen Arts Academy, she moved to New York City to pursue music at the college level. Rossi holds a Bachelor of Music degree from Manhattan School of Music, where she was a pupil of Karen Dreyfus and Daniel Avshalomov. She received her Master of Music degree from The Juilliard School last Spring, where she studied with Roger Tapping and was recipient of the Juilliard Scholarship.

Rossi plays an Argentinian viola by Leonardo Anderi made in 2014. She is a member of the Hartford Symphony since 2016. For perspective, Georgina enjoys oil painting.