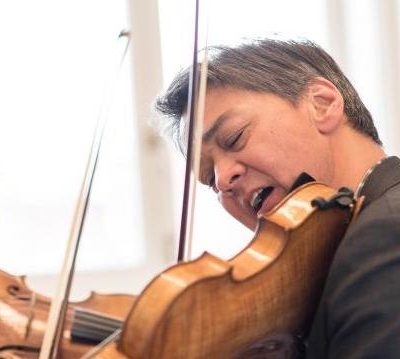 Ian Swensen, violinist, chamber musician, and teacher holds the Isaac Stern chair of violin and chamber music at the San Francisco Conservatory of Music.  He had taught there in the college and pre-college divisions for 31 years.  He is one of the few musicians to have been awarded the Walter W. Naumburg International Competition’s top prize for both solo violin and chamber music (as first violinist of the Meliora String Quartet ). Ian has performed hundreds of concerts around the world and his quartet was managed by ICM and later IMG Artists managements. He has recorded on Telarc and Deutsche Gramophone as well as Music from Menlo. In 2015, he was presented in a Naumberg Foundation’s solo recital in Carnegie Recital Hall.

Over the years he has been a part of many great music festivals around the world both as teacher and performer including Tanglewood, Music from Menlo, The Spoleto Festival, Santa Fe Chamber Music, Bowdoin Music Festival, Orford Music Academy , Domaine Forget de Charlevoix, Marlboro Music Festival, and Morningside Music Bridge. He has also played concerts and tours with the Lincoln Center Chamber Music Society as well as many seasons as a part of the Smithsonian Chamber Music Society with Kenneth Slowik. He recently enjoyed being at Prussia Cove in England playing chamber music.

This year, he was named as a 2021 US Presidential Scholar most influential teacher. His student Grace Huh (2021 US presidential Scholar) also won the Bach prize and the second prize in the 2021 Irving M. Klein International String Competition. Amaryn Olmeda, current student, (13 years old) won the first prize in the 2021 Sphinx Competition Junior Division. His former students have won positions in major orchestras. Others have formed international competition winning quartets including the Telegraph Quartet who won the Naumburg Chamber Music competition in 2016. His former students were also appointed to major teaching positions including Cornell University, San Francisco Conservatory, Sacramento State University, and The Juilliard School.

Ian was born in New York of Japanese and Norwegian parents. They were both musicians, professional pianist and clarinetist. His primary teachers were Dorothy DeLay and Donald Weilerstein and the other members of the Cleveland String Quartet. In earlier years Ian’s other teachers were Shirley Givens, Christine Dethier, and Jens Ellerman. Ian plays recitals these days with his partner and pianist Weicong Zhang. He is fortunate to play on a beautiful Nicolo Gagliano violin from 1761 and a Grand Adam bow from the early 1800’s. This violin was recently restored by Adam Pelzer of Florian Leonhard Fine Violins.