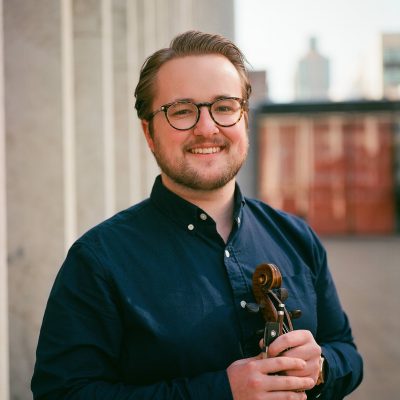 Jacob van der Sloot started playing violin under the instruction of his father, Michael van der Sloot, when he was five. He then switched to viola with Mr. van der Sloot when he was 13 and since then has made numerous accomplishments in the classical music scene. Growing up in Victoria, Canada, Jacob has also had the opportunity to solo with multiple orchestras, being praised for his “..deep, rich sound with flying colours” (Times Colonist, Canada). Jacob has gone on to perform in halls around the world such as Carnegie Hall and David Geffen Hall in New York City,  Museo Del Violino in Cremona, Bing Concert Hall in Stanford, and the Bejing Conservatory Concert Hall, among others. Another milestone accomplishment for Jacob was his acceptance into the Perlman music program, with whom he traveled to New York, San Francisco, and Tel Aviv, Israel. Jacob has also participated in numerous other programs in Canada, the United States, China, Israel, and Italy, studying with prestigious teachers such as Pinchas Zukerman, Patty Kopec, Máté Szücs, Michael Geiler, Lawrence Dutton, and Roberto Diaz, all of whom he aspires to. Recent awards include 1st prize at the Louis Sherman Concerto Competition and 2nd prize at the NAC National Bursary Competition. Jacob also made his solo Carnegie debut in 2018 playing the Brahms E-flat viola sonata as part of Julie Jordan’s “International Rising Stars” concert series.

Aside from solo playing, Jacob is extremely passionate about chamber music. With numerous groups growing up in Canada, Jacob won many local and provincial competitions. When Jacob moved to New York to study at The Juilliard School with Steven Tenenbom, he joined a quartet that went on to win 2nd place at the Fischoff chamber competition as well as the North Carolina Young Chamber Musicians competition. Jacob’s chamber music Carnegie debut occurred in 2018, playing Dvorak’s “American” string quartet in Carnegie Hall’s Stern Auditorium as part of “The Foundation for the Revival of Classical Music.” Jacob has also taken on teaching younger students and has a teaching position at the Victoria Summer Strings Festival.

Aside from music, Jacob is quite keen about photography. When not practicing the viola or other music-related activity, Jacob enjoys taking to the streets of New York, exploring and photographing new places and people. He has recently taken up an interest in film photography, as inspired by street photographers from the 70s and 80s.