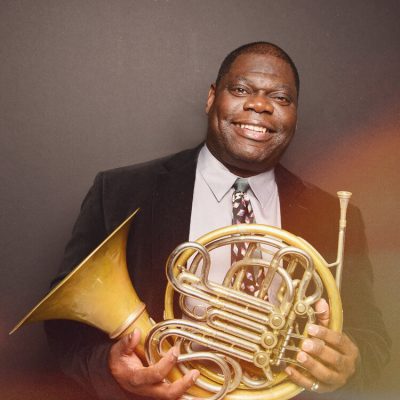 Jeff Scott is the French hornist of the Oberlin-founded ensemble Imani Winds, a position that has brought him to Carnegie Hall, Walt Disney Concert Hall, the Kennedy Center, and countless other prominent stages—as well as the stage of Finney Chapel for an Artist Recital Series performance in 2014. With Imani Winds, he leads master classes with hundreds of students every year.

Scott has been a member of the Alvin Ailey American Dance Theater and Dance Theater of Harlem since 1995, and he has performed numerous times with the Jazz at Lincoln Center Orchestra under the direction of Wynton Marsalis. He was an orchestra member for The Lion King’s Broadway run from 1997 to 2005, as well as the 1994 revival of Show Boat.

In the studio, Scott has performed on movie soundtracks by Terence Blanchard and Tan Dun, and has collaborated with the likes of Chick Corea, Wayne Shorter, Chris Brubeck, Jimmy Heath, and others. He has toured with the backing ensembles of Barbra Streisand and Luther Vandross.

Insatiable in his appetite for all aspects of the creative process, Scott has served as composer or arranger for a multitude of projects, including an Off Broadway production of Becoming Something: The Story of Canada Lee and the staged production of Josephine Baker: A Life of le Jazz Hot! in addition to many original works for solo winds and ensembles of all kinds.

Scott is a graduate of the Manhattan School of Music, where he studied under David Jolley. He earned a master’s degree from the State University of New York at Stony Brook under William Purvis, and he continued his studies with Scott Brubaker and Jerome Ashby.