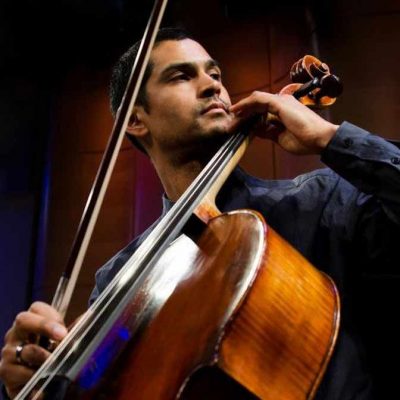 Jeffrey Zeigler is one of the most innovative and versatile cellists of our time. He has been described as “fiery”, and a player who performs “with unforced simplicity and beauty of tone” by the New York Times. Acclaimed for his independent streak, Zeigler has commissioned dozens of works, and is admired as a potent collaborator and unique improviser. Zeigler is the recipient of the Avery Fisher Prize, the Polar Music Prize, the President’s Merit Award from the National Academy of Recorded Arts (Grammy’s), the Chamber Music America National Service Award and The Asia Society’s Cultural Achievement Award.

Zeigler’s multifaceted career has led to collaborations and tours with a wide array of artists from Yo-Yo Ma and Roomful of Teeth to Tanya Tagaq and Hauschka, and from Philip Glass and John Corigliano to Laurie Anderson and John Zorn. He has also performed as a soloist with the Los Angeles Philharmonic, the Royal Danish Radio Symphony and the Ulster Orchestra under the batons of JoAnn Falletta, Dennis Russell Davies, Peter Oundjian and Dmitry Sitkovetsky.

This season, Zeigler will give the World Premier of a new cello concerto by Mark Adamo in Carnegie Hall as well as the European Premier of “The Sacred Veil” by Eric Whitacre in St John’s Smith Square in London. Also, as a champion of interdisciplinary collaboration, Zeigler is the cellist of the vocal punk band (M)iyamoto is Black Enough alongside slam poetry champion Roger Bonair-Agard, Rome Prize recipient Andy Akiho and drummer Sean Dixon, and the feature of a new cello opera entitled Old Man and the Sea directed by Karmina Šilec with music by Paola Prestini and libretto by Royce Vavrek.

Mr. Zeigler has released dozens of recordings for Nonesuch Records, Deutsche Grammophon, Cantaloupe and Smithsonian Folkways and has appeared with Norah Jones on her album Not Too Late on Blue Note Records. Zeigler can also be heard on the film soundtrack for Paolo Sorrentino’s Academy Award winning film, La Grande Bellezza, as well as Clint Mansell’s Golden Globe nominated soundtrack to the Darren Aronofsky film, The Fountain. Zeigler can also be seen making an on screen cameo performing the music of Paola Prestini in Season 4 of the Amazon Prime’s Golden Globe Award winning series Mozart in the Jungle.

When he is not on stage, Zeigler is the Label Director of National Sawdust Tracks, the non-profit, in-house record label of National Sawdust, an artist-led, multidisciplinary new music venue in the heart of Williamsburg, Brooklyn. National Sawdust Tracks releases content that reinterprets genre, facilitates provocative collaboration, and encourages new ways of listening. New releases this season include albums by Kamala Sankaram, Square Peg Round Hole and music by the winners of the Hildegard Competition for Female, Trans, and Non-Binary Composers.

Jeffrey Zeigler was the cellist of the internationally renowned Kronos Quartet for eight seasons. During his tenure, Zeigler had the opportunity to collaborate with a wide range of luminaries from Henryk Gorecki and Steve Reich to Noam Chomsky, Howard Zinn and Tom Waits. Zeigler is currently the Co-Chair of the String Department and Professor of Cello at Mannes School of Music in New York City, and is on faculty at the Bowdoin International Music Festival in Maine.