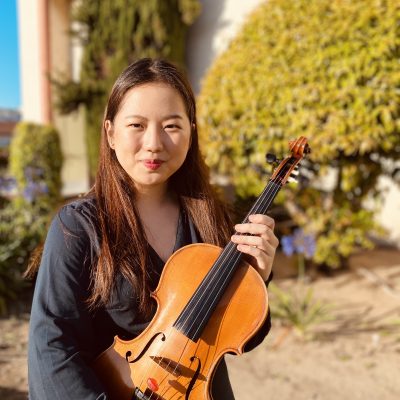 Born in Seoul, South Korea, violist Jiwon Kim won prizes at both the Nanpa and Music Education News competitions at an early age. After moving to the United States, she won the 2015 Richmond Youth Symphony Orchestra Concerto Competition, as well as a prize at the Richmond Symphony Orchestra League’s competition, which led to a performance of the Stamitz Viola Concerto as a soloist with the Richmond Symphony Orchestra. Jiwon also performed with A Far Cry in Jordan Hall at the New England Conservatory as the winner of A Far Cry/New England Conservatory Prep Collaborative Competition.

Jiwon has attended several summer music programs including Yellow Barn Young Artists Program, Music@Menlo Young Performers program, Music Academy of the West, and Heifetz International Music Festival. As an avid chamber musician, she was invited as a member of Almas Quartet to work with the Dover and Verona Quartets in Canada, Madeline Island’s Fellowship String Quartet Program, and McGill International String Quartet Academy in 2020, which was cancelled due to the COVID-19 pandemic. In addition, Jiwon has performed in solo masterclasses given by Roberto Diaz, Kim Kashkashian, Carol Rodland, Richard O’Neill, Karen Dreyfus, Cynthia Phelps, and Jeffrey Irvine. In 2018, she graduated from Walnut Hill School for the Arts, where she studied with Mai Motobuchi, violist of the Borromeo String Quartet. She currently studies with Jeffrey Irvine at the Cleveland Institute of Music.