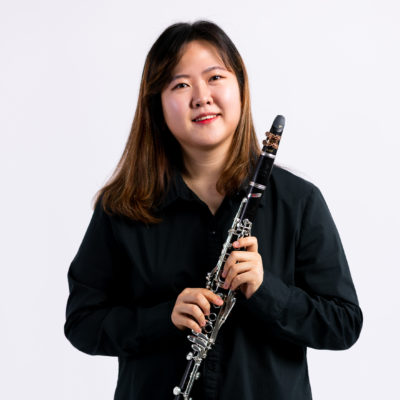 Clarinetist JuHyun Lee was selected as a fellow at the Bowdoin International Music Festival in 2021. She has also been a winner of the 2018 Fuchs chamber competition at the Manhattan School of Music, and the New York Youth Symphony Chamber Program at Carnegie Hall. In addition, she has participated in the 2019 National Orchestra Institute, playing all positions in the orchestra.

JuHyun is an accomplished soloist on multiple continents. She has been highly successful in her native Korea, winning first prize at the Korea Herald Competition, Universal Music Competition, and Korea Competition. She made her United States solo debut in 2018.

JuHyun has been dedicated in her pursuit of a performance career since her time at Yewon School and Seoul Art High School in Korea, where she began her instrumental studies.

JuHyun is very active in musical outreach and community engagement, leading yearly performances on the Hannah International Mobilization Medical Missionary ship. She is also a frequent performer at Cha Hospital, as well as at various churches and other venues. She believes strongly that music is a powerful force for healing and should be celebrated at all levels of community and society.

JuHyun is currently scheduled to receive her master’s degree in 2023 at The Juilliard School in the studio of Anthony McGill. JuHyun received her bachelor’s degree from the Manhattan School of Music where she studied with Alan Kay.