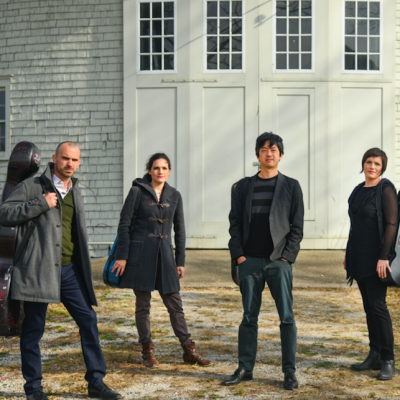 The Jupiter String Quartet is a particularly intimate group, consisting of violinists Nelson Lee and Meg Freivogel, violist Liz Freivogel (Meg’s older sister), and cellist Daniel McDonough (Meg’s husband, Liz’s brother-in-law). Now enjoying their 17th year together, this tight-knit ensemble is firmly established as an important voice in the world of chamber music. The New Yorker claims, “The Jupiter String Quartet, an ensemble of eloquent intensity, has matured into one of the mainstays of the American chamber-music scene.”

Their chamber music honors and awards include the grand prizes in the Banff International String Quartet Competition and the Fischoff National Chamber Music Competition in 2004. In 2005, they won the Young Concert Artists International auditions in New York City, which quickly led to a busy touring schedule. They received the Cleveland Quartet Award from Chamber Music America in 2007, followed by an Avery Fisher Career Grant in 2008. From 2007-2010, they were in residence at the Chamber Music Society of Lincoln Center’s Chamber Music Two and, in 2009, they received a grant from the Fromm Foundation to commission a new quartet from Dan Visconti for a CMSLC performance at Alice Tully Hall. In 2012, the Jupiter Quartet members were appointed as artists-in-residence and faculty at the University of Illinois, where they continue to perform regularly in the beautiful Krannert Center for the Performing Arts, maintain private studios, and direct the chamber music program.

The Jupiters place a strong emphasis on developing relationships with future classical music audiences through educational performances in schools and other community centers. They believe that, because of the intensity of its interplay and communication, chamber music is one of the most effective ways of spreading an enthusiasm for “classical” music to new audiences. The quartet has also held numerous masterclasses for young musicians, including most recently at Northwestern University, Eastman School of Music, the Aspen Music Festival, Encore Chamber Festival, Madeline Island Music Festival, and Peabody Conservatory.

Early exposure to chamber music brought these four musicians together. Meg and Liz grew up playing string quartets with their two brothers and they came to love chamber music during weekly coachings with cellist Oliver Edel, who taught generations of students in the Washington, D.C. area. Nelson’s parents are pianists (his father also conducts) and his twin sisters, Alicia and Andrea, are both musicians. Although Daniel originally wanted to be a violinist, he chose the cello because the organizers of his first string program declared that he had “better hands for the cello,” and is happy that he ended up where he did.

The quartet chose its name because Jupiter was the most prominent planet in the night sky at the time of its formation and the astrological symbol for Jupiter resembles the number four. They are also proud to list among their accomplishments in recent years the addition of seven quartet children: Pablo, Lillian, Clara, Dominic, Felix, Oliver, and Joelle. You may spot some of these miniature Jupiters in the audience or tagging along to rehearsals, along with their grandparent babysitters.