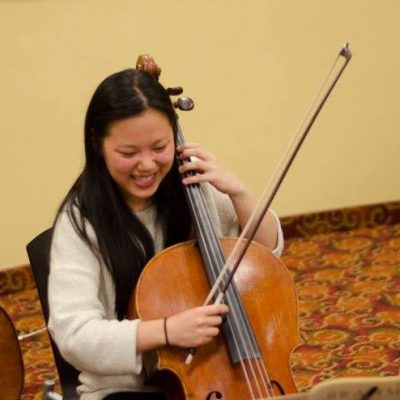 Canadian Cellist Kimberly Jeong holds degrees from the Eastman School of Music, Yale School of Music, and the Royal Conservatory of the Hague. A recipient of the George Eastman Grant, Jeong was previously a student of Steven Doane at the Eastman School of Music. She has received mentorship from artists such as Pinchas Zukerman, Martin Beaver, Nicholas Mann, Michale Tree, as well as members of the Ying, Tokyo, Brentano, and Tackacs string quartets. She served as a member of Musica Nova and the Mannes American Composers Ensmble and has worked with composers such as John Adams, Hans Abrahamsen, and Steven Stucky. A prizewinner in the Canadian Music Competition and the Ontario Music Festival Association, she has attended the Aspen Music Festival and School, as well as festivals at the Orford Arts Centre and the Heifetz International Music Institute. Jeong is a strong believer in arts education and has taught in several educational outreach initiatives in the Rochester, New York area including Music for All and Sound Exchange. She also served as a Teaching Artist with the Yale Music in Schools Initiative. Jeong is especially interested in the interdisciplinary arts; she worked as a research assistant at the Yale Center for the British Art and has given performances in a special conjunction with exhibitions at the Yale University Art Gallery and the Yale Center for the British Art, as well as the Memorial Art Gallery in Rochester, New York.