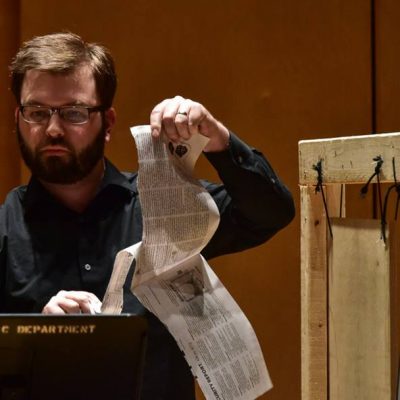 Luke Rinderknecht made his debut with The Cleveland Orchestra performing Paul Creston’s Marimba Concerto. He has performed orchestral and chamber music on four continents as a member of Metropolis Ensemble, The Knights, and Festival Chamber Music, and as a guest with Alarm Will Sound, the Metropolitan Opera, Buffalo Philharmonic, and the Orchestra of St. Luke’s. Luke appears on the Buffalo Philharmonic’s double Grammy award winning recording of John Corigliano’s Mr. Tambourine Man, and has recorded two albums with The Knights on Sony Classical. Highlights of the past season include performances with The Dirty Projectors and Alarm Will Sound at Lincoln Center, Disney Hall, and the Barbican, and performances of Britten’s The Turn of the Screw at Lorin Maazel’s Castleton Festival.

He received his Master of Music and Bachelor of Music degrees from Juilliard, where he studied with Daniel Druckman, Gordon Gottlieb, and Greg Zuber, and was the 2005 recipient of the Peter Mennin Prize for outstanding achievement and leadership in music.