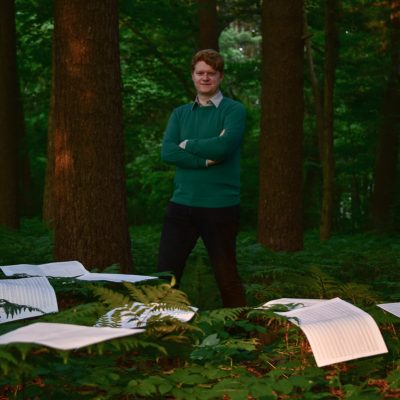 Student Sponsorship by The Lewis and Adria Kaplan Scholarship Fund

Michael Small is a British-American composer whose works are regularly performed by international calibre musicians. Small’s music has been featured by Ensemble 10/10, the American Composers Orchestra, the Aspen Contemporary Ensemble, the Momenta Quartet, Music from Copland House, and soloists including Grammy laureate Gloria Cheng, and the BBC Music award winning violinist Fenella Humphreys.

In 2014, Small received the Alan Horne Prize from the Royal Philharmonic Society, which resulted in a commission for a new solo work for Fenella Humphreys. White Space for solo violin was premiered at Presteigne Festival in 2015, and has been subsequently performed in London, New York, Bristol, Oxford, Liverpool, and at the National Galleries of Scotland in Edinburgh before a painting which inspired the work.

Small recently completed a work for oboe quintet, entitled Jali for his father Jonathan Small, the noted British oboist. Jali will be premiered in August 2018 at the International Double Reed Society conference in Granada, Spain.

Small began his training with David Horne at the Royal Northern College of Music from 2007-2011, and continued his studies at Cornell University under the tutelage of the late Steven Stucky until 2016. He has participated in masterclasses with Rolf Hind, Simon Bainbridge, Christopher Rouse, H.K. Gruber, and Sir Peter Maxwell Davies. His work Alacrity commissioned by Ensemble 10/10 was premiered in May 2010 and described as “a brief but exhilarating ride” by The Guardian. He shortly thereafter received a Sage Fellowship to study at Cornell University. In 2017, Small received his doctorate after successfully defending his dissertation on Julian Anderson’s Symphony.