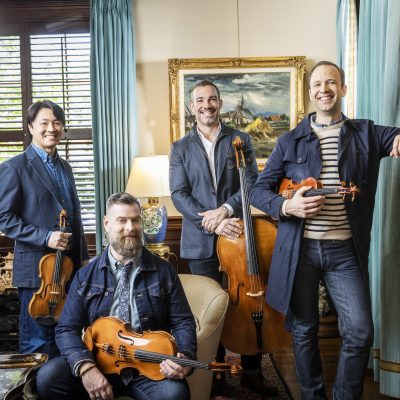 Quartet-in-Residence at the Butler School of Music at the University of Texas, Austin

The Miró Quartet is one of America’s most celebrated string quartets, having performed throughout the world on the most prestigious concert stages. Based in Austin, TX, and thriving on the area’s storied music scene, the Miró takes pride in finding new ways to communicate with audiences of all backgrounds while cultivating the longstanding tradition of chamber music.

The Quartet also continues its Archive Project, honoring the American string quartet tradition by recreating historic recitals by early 20th-century ensembles, including the Flonzaley, Kneisel, and Kolisch Quartets. This season, the Miró performs a program, conceived by the Kneisel Quartet for its own 25th anniversary in 1910, featuring works by Mozart, Schubert, Glière, Franck, and Servais, at Carnegie’s Weill Hall and the Library of Congress in Washington, DC; as well as in Toronto, ON; Troy, NY; and Clemson, SC. The Miró also performs a program by the Kolisch Quartet, featuring Bartók’s Quartet No. 5 and Berg’s Lyric Suite, in Austin, TX and Indianapolis, IN.

The Miró Quartet has championed the music of Pulitzer Prize-winning composer Kevin Puts for more than a decade, and this season it premieres a new string quartet titled Home, composed by Mr. Puts for the Miró’s 25th anniversary. The work is presented by a consortium of commissioning partners, including the Orcas Island Chamber Music Festival (world premiere), Chamber Music Detroit, and Chamber Music Tulsa. The Miró also continues to perform Credo, the composer’s first work written for them (and featured on the recording The Miró Quartet Live!) in cities across the U.S. Among its other recordings is Schubert Interrupted featuring the composer’s “Death and the Maiden” quartet and song with mezzo-soprano Sasha Cooke; and the Miró is featured in Transcendence, an Emmy Award-winning documentary and multimedia project centered around a performance of Schubert’s Quartet in G major on rare Stradivarius and Guarneri instruments.

Formed in 1995, the Miró has been awarded first prize at several competitions including the Banff International String Quartet Competition and Naumburg Chamber Music Competition; and in 2005, became the first ensemble ever to be awarded an Avery Fisher Career Grant. Committed to music education, members of the Miró has given master classes at universities and conservatories throughout the world; and since 2003, has served as faculty string quartet-in-residence at the Butler School of Music at the University of Texas, Austin.