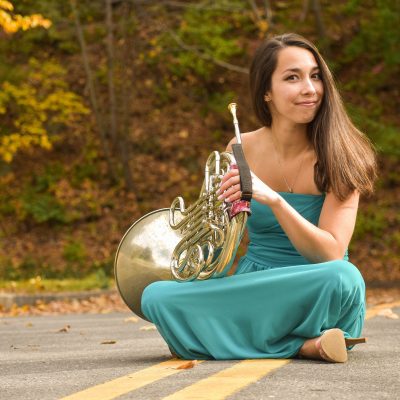 Olivia Martinez is a horn player hailing from Northwest Indiana. Her musical upbringing began at a young age, as she grew up listening to her dad’s classic rock cover band, learning a little piano from her mother, and singing along to musicals with her siblings. She continued this varied musical interest, having performed in jazz groups, Disneyland, early music ensembles, and versicolor–a new music group composed of Yale students. Olivia studied modern and natural horn during her undergrad at Indiana University with Richard Seraphinoff, Dale Clevenger, and Jeff Nelsen, and went on to complete her Master’s degree at Yale University under the tutelage of William Purvis. She will start her doctorate next year at Temple University, studying under Randy Gardner.

Music has taken her across the world, with opportunities to play in China, Carnegie Hall, the Kennedy Center, Vienna, Prague, and Peru. Olivia is an avid traveler and enjoys running wherever she can. She reads books as if her life depended on it and loves teaching students in private lessons. When she isn’t doing one of these things, she is probably studying German, hiking, or going down the metaphorical YouTube rabbit hole.