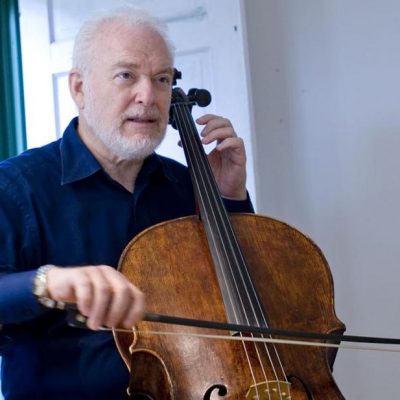 As cellist for 26 years of the legendary Cleveland Quartet, Paul Katz made more than 70 recordings, receiving many distinctions including Best of the Year Awards from Time Magazine and Stereo Review, 11 Grammy nominations, and 2 Grammy Awards. Recordings of special interest to cellists are his Dohnanyi Cello Sonata and the Cleveland Quartet’s Schubert Quintet for two cellos with Yo-Yo Ma. Mr. Katz and the CQ performed at the White House, on “CBS Sunday Morning,” NBC’s “Today Show,” and “The Grammy Awards” (in 1973, the first classical musicians ever to appear). “In The Mainstream: The Cleveland Quartet,” was a one hour documentary televised across the U.S. and Canada, available today on YouTube.

Since 2001 Mr. Katz has taught cello at the New England Conservatory and directs NEC’s Professional String Quartet Training Program. His cello students have achieved international careers with solo CD’s on Decca, EMI, Channel Classics and Sony Classical; are cellists of some of the most illustrious recent string quartets (Ariel, Cavani, Jupiter, Lafayette, Pacifica, Parker and Ying); are principal chairs in the orchestras of Detroit, St. Louis, Los Angeles, Oslo, Osaka, and are members of many American symphony orchestras such as Buffalo, Chicago, Cleveland, National Symphony, Pittsburgh, Rochester and St. Louis.