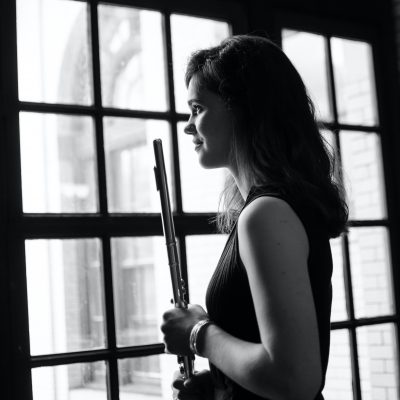 Canadian flutist Phoebe Robertson has recently performed in such venues as Amsterdam’s Royal Concertgebouw and Hamburg’s Elbphilharmonie, earning commendations for her solo, chamber, and orchestral playing. Recipient of the Grand Prize of the National Arts Centre Orchestra Bursary Competition in 2015, she has since performed in competitions and festivals across North America and Europe, earning the Harry G. Archer Award, the title of Major Artist of the Pittsburgh Concert Society, and top prizes in the Carnegie Mellon Philharmonic Soloist Competition and the Silberman Chamber Music Competition. Her playing has been featured on BBC Radio 3 and in records on the Linn and NYOC labels.

Ms. Robertson appeared as a soloist with Symphony New Brunswick for three performances in May 2021, performing Kelsey Jones’s Suite for Flute and Strings in celebration of the orchestra’s founder. Her previous appearances as soloist include performances with the National Arts Centre Orchestra and the Carnegie Mellon Philharmonic. An avid proponent of new music, Ms. Robertson performed a recital of new works for solo flute written for her by the members of the Tesselat International Composers’ Collective in December 2019 and recorded two premieres as a fellow of the Bowdoin International Music Festival during the summer of 2020.

Her performances as an orchestral flutist have brought her to halls throughout Europe and North America, including a broadcasted performance with the Orchestra of the Americas at the 2018 Edinburgh International Festival. She has also appeared with the National Arts Centre Orchestra, Ottawa Symphony Orchestra, European Union Youth Orchestra, and National Youth Orchestra of Canada. As a principal flutist for the 2017 “Edges of Canada” tour with NYO Canada, she starred in a documentary produced by the National Film Board of Canada.

Raised in Sackville, New Brunswick, Canada, Ms. Robertson is currently a candidate for the degree of Doctor of Musical Arts at the Manhattan School of Music in New York, studying with Linda Chesis and Robert Langevin. In November and December 2020, she served as Lecturer in Flute Performance at Mount Allison University. She has presented lecture-recitals and papers at the College Music Society Northeast Conference and the Ottawa Graduate Music Student Conference, and will present at the Canadian University Music Society Conference online in the summer of 2021. Her research on sexuality in Greek myths as depicted in music by Debussy and Ravel has been published in the Eidolon Journal of Classics. Under the advisement of Dr. Edward Green, her present research centres on the drama of opposition in the concertante flute works of Sofia Gubaidulina.