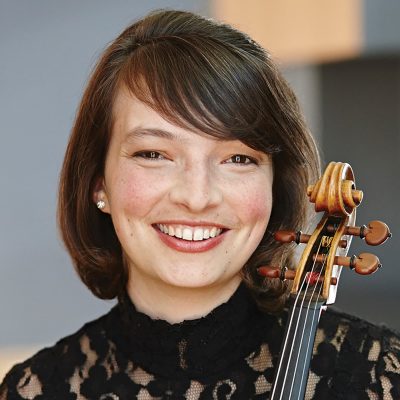 Violist Rebecca Albers has performed throughout North America, Asia and Western Europe. Her performances have been seen on national television in the United States and China and heard on National Public Radio and French National Radio. A native of Longmont, CO, Ms. Albers currently resides in Saint Paul, MN as the Principal violist of the Minnesota Orchestra. She enjoys a varied career as a chamber and orchestral musician, soloist and teacher.

As the winner of the Juilliard School’s 2002/03 viola competition, Ms. Albers made her New York solo debut with the Juilliard Orchestra in Alice Tully Hall, performing the New York premiere of Samuel Adler’s Viola Concerto. She made her European recital debut at the Auditorium du Louvre in Paris, France. As a chamber musician, Ms. Albers has performed at such festivals as the Bridgehampton Chamber Music Festival, Bravo Vail Valley Music Festival, Strings Music Festival, Skaneateles Festival and the International Musicians Seminar and Open Chamber Music at Prussia Cove (UK). She has toured extensively with the Albers Trio, a string trio formed with her two sisters, and with “Musicians from Marlboro”, the touring extension of the Marlboro Music Festival.

Ms. Albers has been teaching since she was 12-years-old. While working towards her Master’s Degree, she taught in collaboration with Heidi Castleman in the Juilliard School’s College and Pre-College divisions. Prior to joining the Minnesota Orchestra, she was on the viola faculty at the University of Michigan, School of Music Theatre and Dance. She has also taught at the Perlman Music Program in New York, the North American Viola Institute in Orford, QC and has served on the Executive Board of the American Viola Society. Ms. Albers received her Bachelor and Master of Music degrees from the Juilliard School where she studied with Heidi Castleman and Hsin-Yun Huang. Past teachers include James Maurer and Ellie Albers LeRoux.