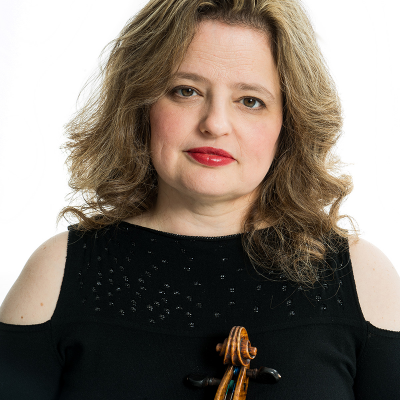 Renée Jolles, violinist, enjoys an eclectic career as soloist and chamber artist specializing in a wide variety of styles from the Baroque to the contemporary. Hailed as a “real star” by The New York Times for her New York Concerto debut in Alice Tully Hall, she has premiered hundreds of works, including the American premiere of Schnittke’s Violin Concerto No. 2. Her concerto engagements have included orchestras such as Orpheus Chamber Orchestra, The Philharmonic Orchestra of New Jersey, The Cape May Festival Orchestra, and The Salisbury Symphony. Ms. Jolles is a member of the Jolles Duo (harp and violin), Continuum, Intimate Voices, The New York Chamber Ensemble, and is a concertmaster of the world-renowned, Grammy Award winning, conductorless Orpheus Chamber Orchestra. Honored to be a featured soloist in three world premieres as part of the Orpheus “New Brandenburg” commissions, she can be heard as soloist on the WQXR website in live performances from Carnegie Hall performing the music of Paul Moravec, Melinda Wagner, and Peter Maxwell Davies. She has performed at festivals such as Marlboro, Cape May, Bowdoin International Music Festival, Rockport (Mass.), Norfolk, Taos, Riverrun, and The Chamber Music and Composers’ Forum of the East. Committed to recording new music, she can be heard as soloist and chamber artist on the Cambria, CRI, North/South Recordings, Albany, and New World record labels. She can also be heard on three recently released albums appearing this season which showcase the music of composers Oleg Felzer, Victoria Bond, and Ushio Torikai. Before accepting the position of Associate Professor of Violin at Eastman, Ms. Jolles was on the faculty of The Juilliard School, Pre-College Division, The Mannes School of Music, Preparatory Division, Hoff-Barthelson Music School, and The Aaron Copland School of Music at Queens College. During the summer, she is on the faculty at the Bowdoin International Music Festival.

Ms. Jolles received her Bachelor of Music and Master of Music degrees from Juilliard, where, upon graduation, she was presented with the school’s highest award, the William Schuman Prize. While at Juilliard, she held teaching fellowships in Chamber Music as an assistant to the Juilliard Quartet, and in Ear-Training. Her teachers have included Lewis Kaplan, Felix Galimir, Jacob Lateiner, and members of the Juilliard, Tokyo, and American String Quartets.