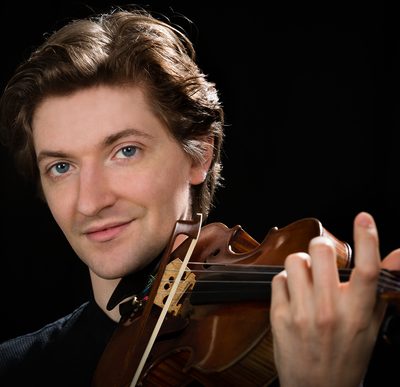 Violinist Robin Scott is a musician of great flexibility and charisma who enjoys a varied career as a soloist, chamber musician and concertmaster. His gifts have been recognized with many awards, including top prizes at the Menuhin, Irving Klein, Stulburg and WAMSO Young Artist competitions. Mr. Scott has appeared as a soloist with the Indianapolis and Montgomery symphonies, the Minnesota Orchestra, the Orchestre National de Lille (France), and the Fort Wayne Philharmonic. He has performed throughout the United States and France in such venues as Carnegie’s Weill Recital Hall and the Schubert Club in St. Paul, Minnesota.

An avid and passionate chamber musician, Mr. Scott has appeared in this capacity at the Kennedy Center, the Library of Congress, the Smithsonian Institution, Boston’s Jordan Hall, the Isabella Stewart Gardener Museum, the Perelman Theatre in Philadelphia’s Kimmel Center, Carnegie’s Weill Hall, The Morgan Library, and Town Hall in New York City. His festival appearances include the Marlboro Music Festival, Ravinai’s Steans Institute, Yellow Barn, Kneisel Hall, the Saratoga Chamber Music Festival, the Chesapeake Chamber Music Festival, MusicIC in Iowa City. He has participated in the acclaimed Music From Marlboro tours, as well as tours under the auspices of the Ravinia Festival.