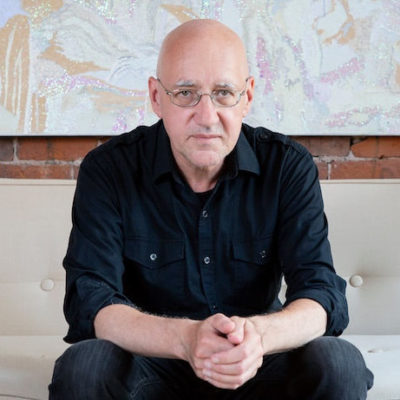 Heralded as “music with a distinctive voice” by the New York Times and as “lyrical, colorful, firmly rooted in tradition, but absolutely new” by the Washington Post, Sebastian Currier’s music has been presented at major venues worldwide by acclaimed artists and orchestras.

With works spanning across solo, chamber and orchestral genres, Currier’s works have been performed by Anne-Sophie Mutter, the Berlin Philharmonic, the New York Philharmonic, the Boston Symphony Orchestra, and the Kronos Quartet. In November 2021, conductor Louis Langrée leads the Cincinnati Symphony Orchestra in the world premiere of Currier’s Beethoven-inspired Track 8. Waves, Currier’s new work for soprano, chamber ensemble, video and electronics, based on Virginia Woolf’s The Waves, is premiered by the Network for New Music in Philadelphia in February 2022, then brought to Sarasota by ensemblenewSRQ in April 2022. Other recent premieres include Voyage Out (2019) for piano quintet, premiered by the Seattle Chamber Music Society; his violin concerto Aether (2018) for violinist Baiba Skride and the Boston Symphony Orchestra with conductor Andris Nelsons (co-commissioned by the Leipzig Gewandhaus); Ghost Trio (2018), premiered by violinist Anne-Sophie Mutter, cellist Daniel Müller-Schott, and pianist Lambert Orkis at Carnegie Hall; and Eleven Moons (2018), premiered by soprano Zorana Sadiq and Boston Musica Viva.

Currier’s music has been enthusiastically embraced by violinist Anne-Sophie Mutter who has commissioned, premiered, and recorded several of Currier’s pieces, including his “rapturously beautiful” (New York Times) violin concerto Time Machines, which was commissioned by Ms. Mutter and premiered by the New York Philharmonic in June 2011 with a recording of the performance released by Deutsche Grammophon the following September.

Currier has received many prestigious awards including the Grawemeyer Award (for the chamber piece Static), Berlin Prize, Rome Prize, a Guggenheim Fellowship, a fellowship from the National Endowment for the Arts, and an Academy Award from the American Academy of Arts and Letters, and has held residencies at the Institute for Advanced Studies, as well as the MacDowell and Yaddo colonies.