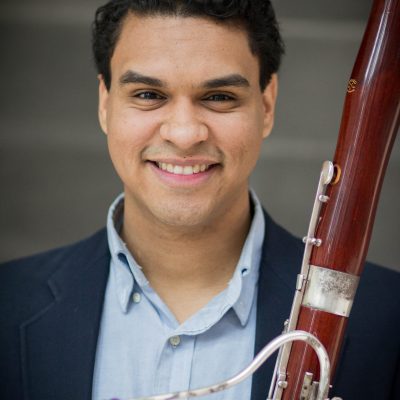 Dynamic Colombian-American bassoonist Steven Palacio invites audiences to reimagine the classical music concert experience through energetic presentations of the instrumental repertoire, thought-provoking lectures, and experimentation with cross-genre programming. Mr. Palacio is committed to bringing the works of living composers to life with the commissioning of solo and chamber music works. A champion of new music, he has performed 15 world premieres this season alone including Pixie by Trey Makler; a joint commission with the New York City Ballet for the New York Choreographic Institute. He has performed with the League of Composers Orchestra and is a member AXIOM, a new music ensemble that is devoted to performing masterworks of the 20th and 21st centuries. This season, AXIOM will be working with Steve Reich on a performance of Tehillim (1981) that will be featured in a documentary for the BBC.

Mr. Palacio believes art should reflect society and is dedicated to highlighting the music of women, composers of color, and other marginalized groups. He believes that chamber music is the best vehicle to express his artistic voice and has been involved in the founding of numerous chamber music collectives including The Conservatory Chamber Players, Tiburón V; Grand Prize winners of The Glenn Gould School Chamber Music Competition, and Tangent Winds; a quintet that formed at The Juilliard School that has gone on to receive accolades from the Fischoff National Chamber Music Competition, the Pro Musicis International Award, and has been invited to participate in the New York City Ballet’s Choreographic Institute.

Mr. Palacio has held assistant principal bassoon positions with the Georgian Bay Symphony Orchestra (Canada) and the Northwest Florida Symphony Orchestra. As a New York-based musician, he enjoys an active freelance career; making guest appearances with Columbia University, Symphony Orchestra of the Americas, the St. Jean Baptiste Orchestra and the League of Composers. At Juilliard, he has played principal bassoon under the batons of Barbara Hannigan, Thomas Adès, Yannick Nézet-Séguin, and most recently David Robertson on a performance of Messiaen’s Turangalîla-Symphonie at David Geffen Hall, home of the New York Philharmonic.

While at Juilliard, Mr. Palacio has peaked an interest in historical performance practice. He sought instruction in historical instruments from Dominic Teresi, principal bassoonist of Tafelmusik Baroque Orchestra. Mr. Palacio attended the Tafelmusik Baroque Summer Institute in 2018 and has been invited to perform numerous times with the Juilliard415 Baroque Orchestra. Projects have included a collaboration between the Historical Performance Department and the Dance Division in a celebration of the music of Jean-Philippe Rameau. He also participated in Juilliard415: In the Galleries, a performance to honor the opening of “The Art of Music: New Galleries for Musical Instruments” at the Metropolitan Museum of Art.

In 2019, he was awarded a fellowship to attend the Chautauqua Institution where he was guest principal bassoonist for a performance of Shostakovich Symphony No. 7 “Leningrad” with the Chautauqua Symphony Orchestra. Other festival appearances include Aspen Music Festival and School, Imani Winds Chamber Music Festival, Brevard Music Center, and the National Symphony Orchestra Summer Music Institute in Washington D.C.

Mr. Palacio is a teaching artist in the New York City Public School system where he provides applied instrument instruction on all woodwind instruments to fourth through sixth grade students. Additionally, he is a recipient of the Music Advancement Program (MAP) fellowship where he is a mentor in wind ensemble and orchestral playing. He is a member of the education team at the Juilliard Pre-College division where he works with the Pre-College Orchestra, running woodwind sectionals and orchestral mentorship to advanced music student.

Mr. Palacio is a Master of Music degree candidate at The Juilliard School under the direction of Kim Laskowski. He holds an Artist Diploma at the Glenn Gould School of The Royal Conservatory of Music (Canada) under Frank Morelli, a Bachelor of Science in International Affairs and a Bachelor of Music with honors from The Florida State University under the direction of Jeffrey Keesecker.