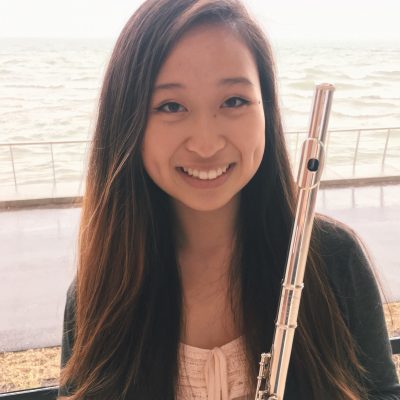 Susan Kang is pursuing her Master’s Degree at Rice University under the tutelage of Leone Buyse. Kang has received numerous awards in competitions, including first prize at the Chicago Flute Club’s Donald Peck Competition, as well as the Musician’s Club of Women’s Farwell Trust Award. A sought after orchestral musician, Kang received a fellowship at the Tanglewood Music Center for the past two summers and performed with the Chicago Symphony Orchestra MusicNOW and the New World Symphony. She served as an associate member of the Civic Orchestra of Chicago during the 2015-2016 season. She had the privilege of performing under prominent conductors such as Andris Nelsons, Stéphane Denève, Charles Dutoit, Stefan Asbury, Ken-David Masur, Thomas Adés, and Jacques Lacombe. Kang also performed in masterclasses for renowned artists including Emmanuel Pahud, Robert Langevin, Paula Robison, and Denis Bluteau at Domaine Forget and the Orford Academy. She previously studied with John Thorne at Northwestern University.