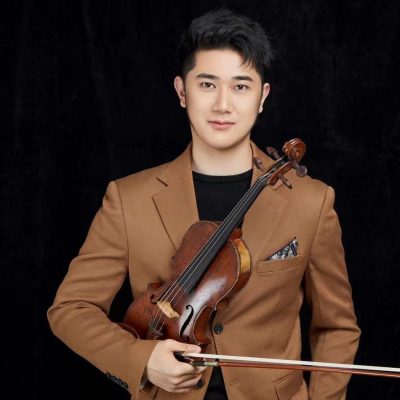 Violinist Tianyu Liu is pursuing his master’s degree in the studio of Joseph Lin at The Juilliard School, where Tianyu is a proud recipient of Kovner Fellowship.

In April 2020, Tianyu won the first prize in the Music Teachers National Association (MTNA) Young Artist Performance String Competition. He was the first violinist from South Carolina to win this award. He was also honored to be selected as one of the 22 competitors chosen globally to participate in the Menuhin competition in Richmond, Virginia.

In December 2018, Tianyu made his first entrance to the famous international violin competition. After a rigorous first round of auditions, Tianyu Liu was selected as one of 16 quarter finalists in the Michael Hill International Violin Competition in New Zealand.

Liu completed his undergraduate studies in violin with Professor Siow at the College of Charleston. He won the Ronald Sachs International Music Competition (grand prize) in North Carolina and made his American debut at the Bruno Walter auditorium in Lincoln Center and performed the Waxman Carmen Fantasy. Liu was a recipient of the Marion and Wayland H. Cato, Jr. Endowed Scholarship for the School of the Arts, the Lee Harwood Scholarship in Music, and the Reba Kinne Huge Award in Music. During his undergraduate studies, Tianyu performed the Mendelssohn Violin Concerto with the College of Charleston Orchestra.

In 2016, under the mentorship of violin professor Lee-Chin Siow, he went on to win the 1st Prize and the Best Paganini Prize in the Cremona International Competition for Strings in Italy.