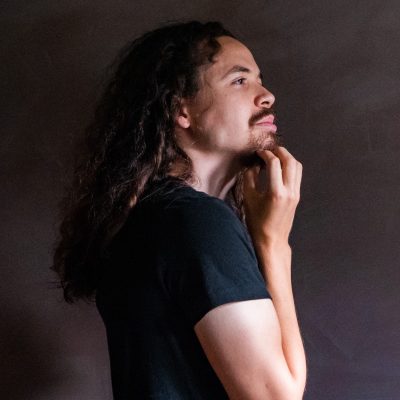 Tyler Taylor (1992) is a composer-performer living in Louisville, Kentucky. His recent pieces are explorations of the different ways identity can be expressed in musical scenarios. Common among these pieces is a sense of contradiction – sometimes whimsical, sometimes alarming – that comes from the interaction of diverse musical layers. This expression of contradiction likely comes from his being a person of mixed race; being raised on hip hop and R&B while inheriting a European tradition of “classical art music” as his primary form of musical expression in spite of having little or no other cultural ties to Europe; and pursuing a career in a field that generally lacks representation of his demographic.​

Tyler finds the composer-performer experience to be particularly fulfilling. He recently performed in the premiere of his octet “Modus operandi,” performed his horn concerto Lake Music with Orchestra Enigmatic in Louisville, Kentucky, and was invited to perform in the premiere of his horn quartet “some notes” – a commission by the Allumer Horn Quartet of Louisiana. He has enjoyed similar experiences at summer festivals including the Bang on a Can Summer Festival, the Oregon Bach Composers Symposium, the Sewanee Summer Music Festival, and the Imani Winds Chamber Music Festival. Tyler has also honed his skill as a contemporary performer in groups such as the IU New Music Ensemble, Eastman’s Musica Nova, Ossia New Music, the University of Louisville New Music Ensemble, and more.

Tyler’s work has been recognized by awards including the BMI Student Composition Award (2019) and the Howard Hanson Ensemble Prize (2016, 2017), and has been featured during the University of Louisville Annual New Music Festival (2016, 2017, 2018) and the Midwest Composers Symposium (2019). His latest commissions include a nonet “Just Dreams” for the NOI+Festival/ACO Composer Training Fellowship and a piece to be premiered by the IU New Music Ensemble.