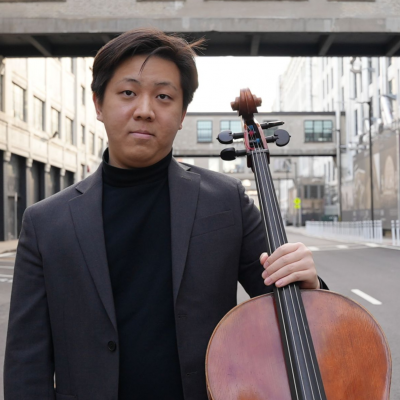 Student Sponsorship by an anonymous donor

Cellist William Suh of Morgantown, WV is a first-prize winner of the Music Teachers’ National Association String Competition, finalist of the Stulberg International String Competition, and recipient of the Jack Kent Cooke Young Artist Award from National Public Radio’s From the Top organization. Other awards include the grand prize at the Stover Memorial Instrumental Competition and finalist of the Mondavi National Young Artist Founders’ Division Competition. As the winner of the New England Conservatory Concerto Competition, he will perform Sergei Prokofiev’s Sinfonia Concertante with the New England Conservatory Symphony and Maestro David Loebel at Jordan Hall in the 2021-2022 season.

William has performed in select masterclasses for Truls Mørk, Marc Coppey and Laurence Lesser in addition to his studies with Astrid Schween, Clara Kim and Zvi Plesser through the Perlman Music Program and its Winter Residency in Sarasota; he has also studied under Colin Carr, Frans Helmerson and Yeesun Kim. A dedicated chamber musician, he has worked with the Morgenstern and Weilerstein trios along with members of the Cleveland, Emerson, Guarneri, Juilliard and Tokyo string quartets. William’s past festival appearances include the Chamber Music Workshop of the Perlman Music Program where he worked closely with Kirsten Docter, Joseph Kalichstein, Roger Tapping and Donald Weilerstein as a Young Artist Fellow.

William began his studies in Honolulu, HI with the late Andrew Eckard, former associate principal of the Honolulu Symphony and Dr. Jonas Carlson. A scholarship recipient of the Morning Music Foundation, he has appeared in concerto performances with the Oahu Civic Orchestra, Kamuela Philharmonic and Antelope Valley Symphony as a prizewinner of their respective concerto competitions.

William received his Bachelor of Music degree with Academic Honors from the New England Conservatory under the tutelage of Paul Katz and will be pursuing a Master of Music degree at the Yale School of Music with Paul Watkins. He is also a full scholarship graduate of the Colburn Music Academy where he studied with Clive Greensmith. An advocate for the democratization of music education, William is a technical consultant for CelloBello. A former grant recipient of the Virtu Foundation, he currently performs on a 1913 cello by Carl Becker Sr. provided by a generous loan from the Colburn Collection.