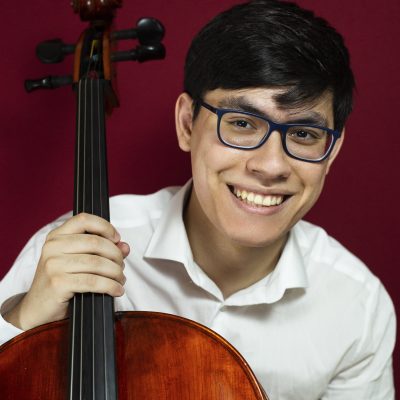 The first American in four decades and youngest musician ever to win First Prize at the International Tchaikovsky Competition Cello Division, Zlatomir Fung is poised to become one of the preeminent cellists of our time. Astounding audiences with his boundless virtuosity and exquisite sensitivity, the 20-year-old has already proven himself to be a star among the next generation of world-class musicians. Fung’s impeccable technique demonstrates a mastery of the canon and an exceptional insight into the depths of contemporary repertoire.

In the 2019-2020 season, Fung performs with orchestra and in recital in all corners of North America. He returns to the Ann Arbor Symphony Orchestra and debuts with Asheville and Aiken Symphony Orchestras, Plymouth Philharmonic, and Symphony Pro Musica in Hudson, Massachusetts. He performs at Carnegie Hall’s Zankel Hall in a joint recital with fellow Tchaikovsky Competition winners in October, following a recital at Friends of Music in Sleepy Hollow, NY. Other recitals include Cold Spring Harbor Laboratory in New York, Wengler Center for the Arts at Pepperdine University in Malibu, Syrinx Concerts in Toronto, The Embassy Series in Washington DC, Salon de Virtuosi and Bulgarian Concert Evenings in New York City, Chamber on the Mountain in Ojai, Evergreen Museum & Library in Baltimore, and Mainly Mozart in Coral Gables. At the Artist Series of Sarasota, Fung will perform the complete works for cello and piano by Beethoven.

As a chamber musician, Fung performs around the world, opening the season with IMS Prussia Cove on tour to London’s Wigmore Hall, Cornwall, Cambridge, West Sussex, and Somerset. He closes the season at Dresdner Musikfestspiele. New York City chamber music engagements include the Aspect Foundation and Jupiter Chamber Players. During the summer of 2019, Fung performed at Musique de Chambre à Giverny, a chamber music festival in northern France.

Of Bulgarian-Chinese heritage, Zlatomir Fung began playing cello at age three and earned fellowships at Ravinia’s Steans Music Institute, Heifetz International Music Institute, MusicAlp, and the Aspen Music Festival and School. A proud recipient of the Kovner Fellowship, Fung currently studies at The Juilliard School under the tutelage of Richard Aaron and Timothy Eddy. Fung has been featured on NPR’s Performance Today and has appeared on From the Top six times. Fung plays an W.E Hill and Sons cello from 1905. In addition to music, he enjoys cinema, reading, and blitz chess.