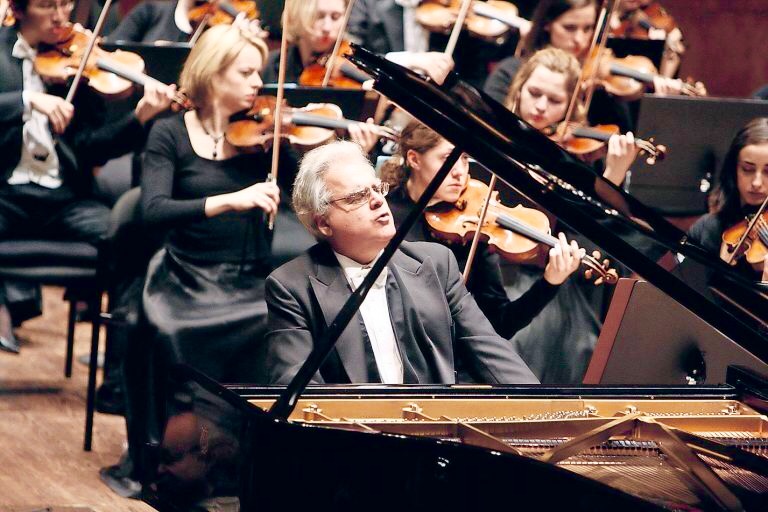 The season closes with a splendid flourish, filling the stage with musicians. Bach’s exhilarating Brandenburg Concerto blends orchestral richness, chamber music intimacy, and soloistic flair into a work that is as fun to play as it is to watch. June Han returns to the stage to share English composer Arnold Bax’s Quintet, and the great Joseph Kalichstein directs and interprets Beethoven’s final magisterial piano concerto, a work he first performed in 1970 and has been performing around the world ever since.

In 1721, Bach was growing weary of his post as Kapellmeister for Prince Leopold in the city of Köthen, where he had worked since 1717. Despite the prestige of the post, Bach felt unfulfilled by the scope of the city’s musical tradition, and so he began seeking patronage elsewhere. He assembled a set of six Concertos for Several Instruments – most likely composed at various points over the preceding decade – recopied them freshly, and sent them to the Margrave Christian-Ludwig of Brandenburg-Schwedt, enclosing an elaborate dedication ingratiating himself to the Prussian noble, excerpted below:

“…I have in accordance with Your Highness’s most gracious orders taken the liberty of rendering my most humble duty to Your Royal Highness with the present Concertos, which I have adapted to several instruments; begging Your Highness most humbly not to judge their imperfection with the rigor of that discriminating and sensitive taste, which everyone knows Him to have for musical works, but rather to take into benign Consideration the profound respect and the most humble obedience which I thus attempt to show Him.”

Bach’s saccharine dedication was not sufficient to procure the Margrave’s patronage; moreover, the music was never even performed (it is possible that the court orchestra at Brandenburg was simply not up to the task). The unused scores were only rediscovered over a century later in the Brandenburg archives, just in time for publication in 1850, on the centenary of Bach’s death, and have since become known as the “Brandenburg Concertos.” Bach, meanwhile, remained at Köthen until 1723, when was appointed cantor at St. Thomas Church in Leipzig, where he spent the rest of his life.

Since the concertos were not composed as a coherent set, each of the six possesses individual characteristics, instrumentations, and particularities. The third concerto, a frequent favorite among the six, is one of two scored without winds. There are no soloists; each of the instruments has moments of prominence, creating a dynamic variety of textures full of counterpoint and interplay. A puzzling feature of the concerto is its second movement. The manuscript contains only two chords, forming a sort of half-hearted cadence. Performers have had to decide how to perform the movement, sometimes inserting a cadenza before the short passage, or else allowing the chords to introduce the whirlwind Allegro on their own.

Quintet for Harp and Strings

Arnold Bax had the fortune to grow up in a prosperous family, where his and his brother’s artistic explorations were encouraged. While his brother went into writing, Arnold took up piano, and grew up practicing daily in the family’s expansive country mansion in Hempstead, in the Southeast of England. In 1900, he began secondary education at the Royal Academy of Music in London, studying piano and composition. His private income provided him great freedom of exploration, allowing him to travel to Germany, Russia, and most importantly, Ireland, where he professed a profound affinity for the culture, the Gaelic language, and the poetry of Yeats.

In the early twentieth century, a time of splintering artistic schools, trends, and tastes, Bax proclaimed himself a “brazen Romantic.” Distancing himself from many of his contemporaries, he admitted, “My music is the expression of emotional states – I have no interest whatever in sound for its own sake.” Bax’s Romanticism is on display in his Harp Quintet, which combines a string quartet with one of Bax’s favorite chamber music instruments. The Quintet was composed on the eve of Bax’s peak fame, achieved in the 1920s with the composition of his seven Symphonies. Bax would end up largely curtailing his composition activities in the late 1930s, until his appointment as Master of the King’s Music in 1941 – a lifetime position for which he occasionally reemerged from creative retirement to compose for royal occasions.

Beethoven began composing his “Emperor” concerto mere months after the famous concert of December 22, 1808, a marathon four-hour affair which included, among other numbers, the public premieres of Beethoven’s Fifth and Sixth Symphonies, Fourth Piano Concerto, and Choral Fantasy. But the context was dramatically different: in the spring following the December premieres, Napoleon bombarded Vienna, marking France’s fourth assault on the Austro-Hungarian empire in the past two decades. While the Viennese nobility, including many within Beethoven’s circle, fled the city, Beethoven, opting to remain in Vienna, moved into the cellar of his brother’s house, withstanding onslaughts of artillery in dilapidating confines. He wrote to his publisher in July, “We have been suffering misery in a most concentrated form. Since May 4th I have produced very little coherent work…the whole course of events has in my case affected both body and soul. The existence I had built up only a short time ago rests on shaky foundations. What a destructive, disorderly life I see and hear around me: nothing but drums, cannons, and human misery in every form.”

The situation calmed somewhat by the end of summer; Beethoven was able to regain momentum, although his outlook remained grim, and by the end of the year he managed despite everything to complete his fifth and final Piano Concerto, in addition to the “Harp” Quartet and three piano sonatas. Beethoven began the concerto with a magisterial opening calculated to surprise audiences – rather than inserting a cadenza toward the end of the movement, as per tradition, Beethoven began the concerto with an elaborate, cadenza-like fantasia of arpeggiated virtuosity, before the soloist cedes to the orchestral exposition. When the concerto received its Viennese premiere in 1812, those arpeggios were performed by the 21-year-old Carl Czerny – known today by piano students for his thick compilations of didactic etudes, but who had been a student and longtime friend of Beethoven’s, and was hand-selected for the occasion by the composer.