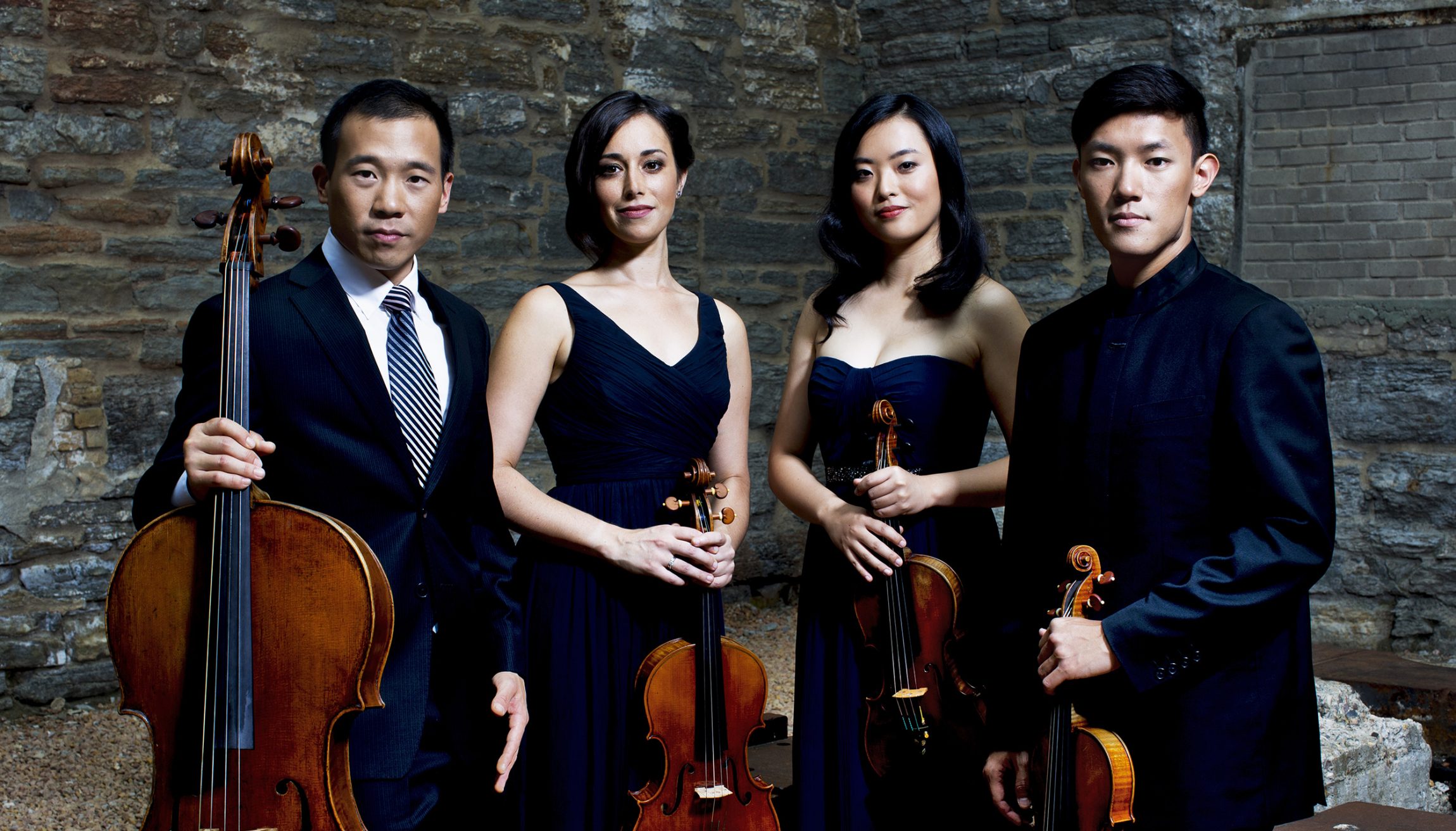 The Grammy Award-winning Parker Quartet makes their highly anticipated Bowdoin Festival debut. While remaining Blodgett Artists-in-Residence at Harvard University, they have spent the past season touring the United States and Europe, collaborating with classical and jazz artists and releasing a recording of Mendelssohn Quartets. Their program opens with the Third String Quartet of Shostakovich, one of the twentieth-century masters of the quartet genre. For the second half, their forces will be doubled for Schubert’s resplendent Octet, the composer’s grandest chamber music work.

When Germany surrendered unconditionally in May 1945, Stalin celebrated his victory by expanding the Soviet empire throughout most of Eastern Europe. And he expected the nation’s artists to craft commensurately celebratory works. Shostakovich recalls in his memoir, “They wanted a fanfare from me, an ode, they wanted me to write a majestic Ninth Symphony.” But Shostakovich could not bring himself to salute Stalin, and when the rather scaled-back symphony was premiered, Stalin was irate. Shostakovich, although he could not have been totally surprised by the reaction, was stricken. It would be nearly a decade before he composed his next symphony, and in the meantime, he devoted his compositional energy to smaller projects, including string quartets, songs, and several film scores.

The Third String Quartet was the only piece Shostakovich wrote in 1946. At its premiere, he conceived a programmatic arc for the five movements:

(1) “Calm ignorance of the future cataclysm”

(2) “Rumblings of unrest and anticipation”

However, Shostakovich did not transcribe these titles on his manuscript score, and never published them. As is often the case with Shostakovich, it is difficult to surmise the motives for either the invention or the retraction of these descriptions. Scholars have proposed contradictory hypotheses: on the one hand, Shostakovich may have included them at the premiere to appease cultural officials, who viewed some non-narrative instrumental music as arcane or elitist; on the other hand he may have withdrawn them precisely to appease those same cultural officials, who may have viewed the grave titles as insufficiently triumphal. In the end, this double-bind of inevitable censure conveys the impossible position the artist faced throughout his life under the Soviet regime.

In 1824, the Austrian Count Ferdinand Troyer, an accomplished clarinettist, commissioned Schubert to compose a septet in the model of Beethoven. Specificaly, the model in question was Beethoven’s Op. 20, composed in 1800, and one of Beethoven’s most enduringly popular works during his lifetime – much to his frustration. (Beethoven, ever irascible, wished that the work would be burned, and once sardonically tried to pass it off as Mozart’s rather than his own.) Yet, the Septet was beloved, and Schubert accepted the commission, supplementing Beethoven’s instrumentation with an additional violin and nearly doubling the length of the elder’s composition.

The Octet, while grand in scale, is curiously light in tone. Formally, it resembles a Classical serenade, framed by substantial outer movements, featuring milder inner movements of alternating character. It shares its six-movement structure – including minuet, scherzo, and variations movements – with Beethoven’s work. As a sort of divertimento, it was even performed as incidental music at cafés such as Zum Roten Igel (“The Red Hedgehog”, a favorite among Viennese musicians). Yet, Schubert also had symphonic aspirations in this expansive chamber music work, conceiving of the Octet as a preparatory exercise for his immense Symphony No. 9, which he began to sketch the following year.

For the fourth movement, Theme and Variations, Schubert drew upon a singspiel (a genre of light opera) he had written in 1815 titled Die Freunde von Salamanka (The Friends from Salamanca), but which was never performed during his lifetime. Repurposing vocal music for instrumental works was a favorite technique of Schubert’s, although the source was more often his large corpus of lieder rather than opera. Here, he adapts a duo-aria titled, “Gelagert unter’m hellen Dach der Bäume” (Sheltered Under the Bright Roof of the Trees).