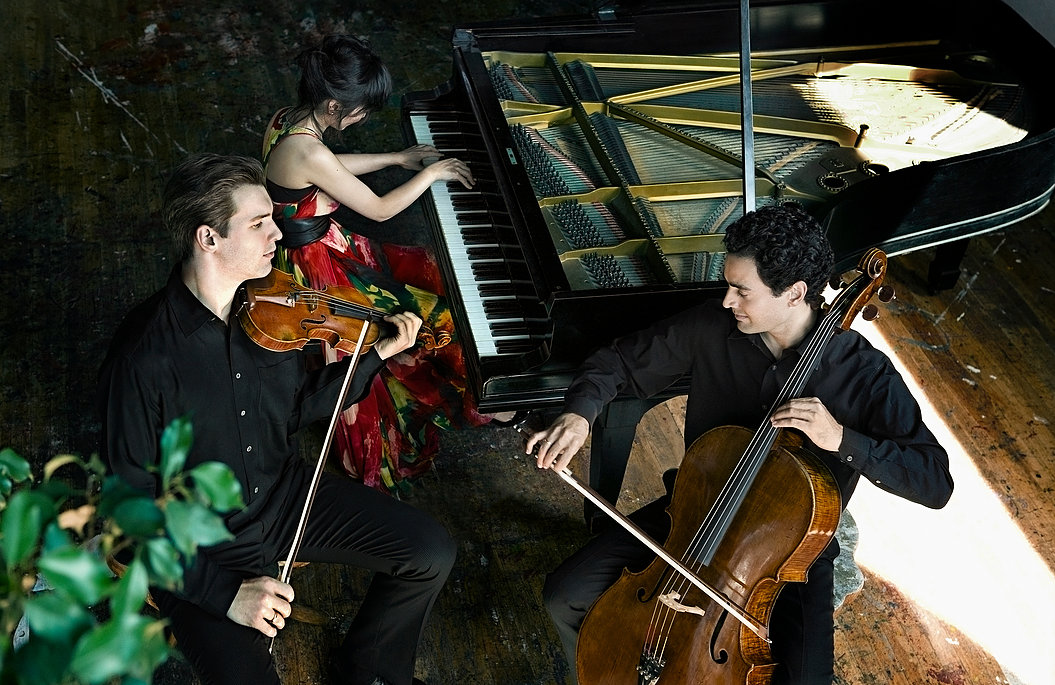 Formed in 2011, the Horszowski Trio – named for the legendary Curtis pedagogue who taught pianist Rieko Aizawa – have been hailed as “the most compelling American group to come on the scene” by The New Yorker. They’ve assembled a sweeping program, juxtaposing Haydn’s exuberant Hungarian Rondo with the mournful austerity of Shostakovich’s opening cello solo. Joy and heartbreak are combined in Fauré’s early chamber work, building up to end the concert with a triumphal climax.

Haydn undertook his first journey to England in 1791 as continental Europe’s most celebrated living composer. His schedule was packed with performances, royal visits, and abundant socialising – “If I wanted, I could dine out every day”, he reported – even as he still managed to compose six symphonies and an opera, among smaller-scale compositions. Haydn was also called upon to give keyboard lessons to prominent pupils. One such student was Rebecca Schroeter. Schroeter and Haydn fell deeply in love, with Haydn’s notebooks testifying to the intensity of their affair; when Haydn returned to London for a second visit in 1794, he stayed a short walk from her residence. It was on that visit that Haydn dedicated a set of three trios, Hob. XV:24–26, to Schroeter. Like all 45 of Haydn’s piano trios, the works in this set maintain ties to the genre of the accompanied keyboard sonata from which they emerged, featuring a virtuosic piano part, adorned and buttressed by the violin and cello.

The middle trio of the set has become a favorite in the repertoire. Perhaps this is due to its moniker, alluding to the rollicking Finale, which bore the title “Rondo, in the Gypsies stile” in the London first edition and later became “Rondo all’Ongarese” (Rondo in the Hungarian Style). The genre of “Hungarian-Gypsy” music became highly popular (and profitable) in Vienna around the turn of the nineteenth century. Musicologist Catherine Mayes has counted hundreds of examples of published music classed as Danses hongroises, Zingaresi, or Ungarische Nationaltänze, exemplifying musical qualities stereotypically associated with “Hungarian-Gypsy” musicians by the Viennese public. Haydn, who had spent most of his career at the Esterházy residence in the Hungarian countryside, will have been exposed to the music of Hungary’s Romani populations who occasionally performed at the palace. He had already tried his hand at imitating the style in an 1788 string quartet, but it is in the effervescent rondo of this Trio that he gave it a full airing, as if to bring to England a musical snapshot from home.

In December 1943, Shostakovich mentioned that he had a trio in progress “on Russian folk themes”. However, when his dear friend, Ivan Ivanovich Sollertinsky – a formidable linguist, musicologist, and artistic director of the Leningrad Philharmonic – died unexpectedly the following February, the composer was deeply shaken. As Shostakovich wrote to Sollertinsky’s widow, “I cannot express in words the grief that engulfed me when I received the news of the Ivan Ivanovich’s death. He was my very closest and dearest friend. I owe all my education to him. To live without him will be unbearably difficult.” Thus, just as Tchaikovsky composed a piano trio as a memorial elegy for the late Nikolai Rubinstein, and Rachmaninoff had composed a piano trio as an elegy following the death of Tchaikovsky, Shostakovich’s trio became a memorial, another example of the emergent Russian tradition of composing elegiac piano trios.

The composer’s mourning made it into the trio’s throbbing opening – played by the cello with tender artificial harmonics in the highest register – as well as into the doleful passacaglia of the third movement. But his original designs to include folk materials in the Trio were also preserved, most famously in the final movement, which is widely considered the first time that Shostakovich makes use of Jewish folk music in his work. Musicologists have interpreted this musical borrowing as a gesture of moral solidarity, particularly following the Soviet liberation of Nazi death camps which drew public awareness to the plight of Jews during the war. While it can often be tempting – and potentially misleading – to read political meanings in Shostakovich’s music, the case here seems clear: the composer regularly voiced his deep support for Jewish people throughout his life, remaining a constant and brave advocate for Jewish friends and colleagues, and Jewish music was to form an enduring component of his own compositional lexicon.

Gabriel Fauré’s Piano Quartet No. 1 in C minoris among the composer’s earliest chamber music compositions. Having returned to Paris in 1871 following the Franco-Prussian war, Fauré established himself in Parisian musical circles on several fronts. He found work as an organist, first at Saint-Sulpice, then at the Madeleine where he filled in for Camille Saint-Saëns; however, he was more deeply attached to the piano, and maintained his organist posts primarily for income. That same year, he and Saint-Saëns formed the Société Nationale de Musique, an organization committed to the promotion of French music and living French composers, and in 1877, the Société premiered Fauré’s first Violin Sonata, Op. 13, which was hailed as his first great masterpiece.

It is difficult to consider this piano quartet in isolation from the events in Fauré’s personal life during this period. Throughout the 1870s, Fauré frequented the salon of famed mezzo-soprano and composer Pauline Viardot, where he fell in love with her daughter, Marianne. After a five-year courtship, the two became engaged in July 1877, only to have Marianne break off the engagement after four months, for reasons which remain unknown and which broke Fauré’s heart. Listeners, including those close to Fauré, have frequently heard the quartet’s Adagio movement as an outpouring of the composer’s anguish; on the other hand, his friend and biographer Émile Vuillermoz has denied this association.

Meanwhile, other events in Fauré’s life may equally have fed into the composition of this first Piano Quartet. It was also in 1877-78 that Fauré traveled to Germany, where he met Franz Liszt and saw productions of Wagner operas for the first time. While there, Fauré presented Liszt with the score to his Ballade, Op. 19, which Liszt claimed to find too difficult to play. Indeed, Fauré’s writing for the piano is always virtuosic, featuring an abundance of musical lines passed between the two hands, testifying to Fauré’s notable ambidexterity. The pianistic writing in this quartet is no exception.