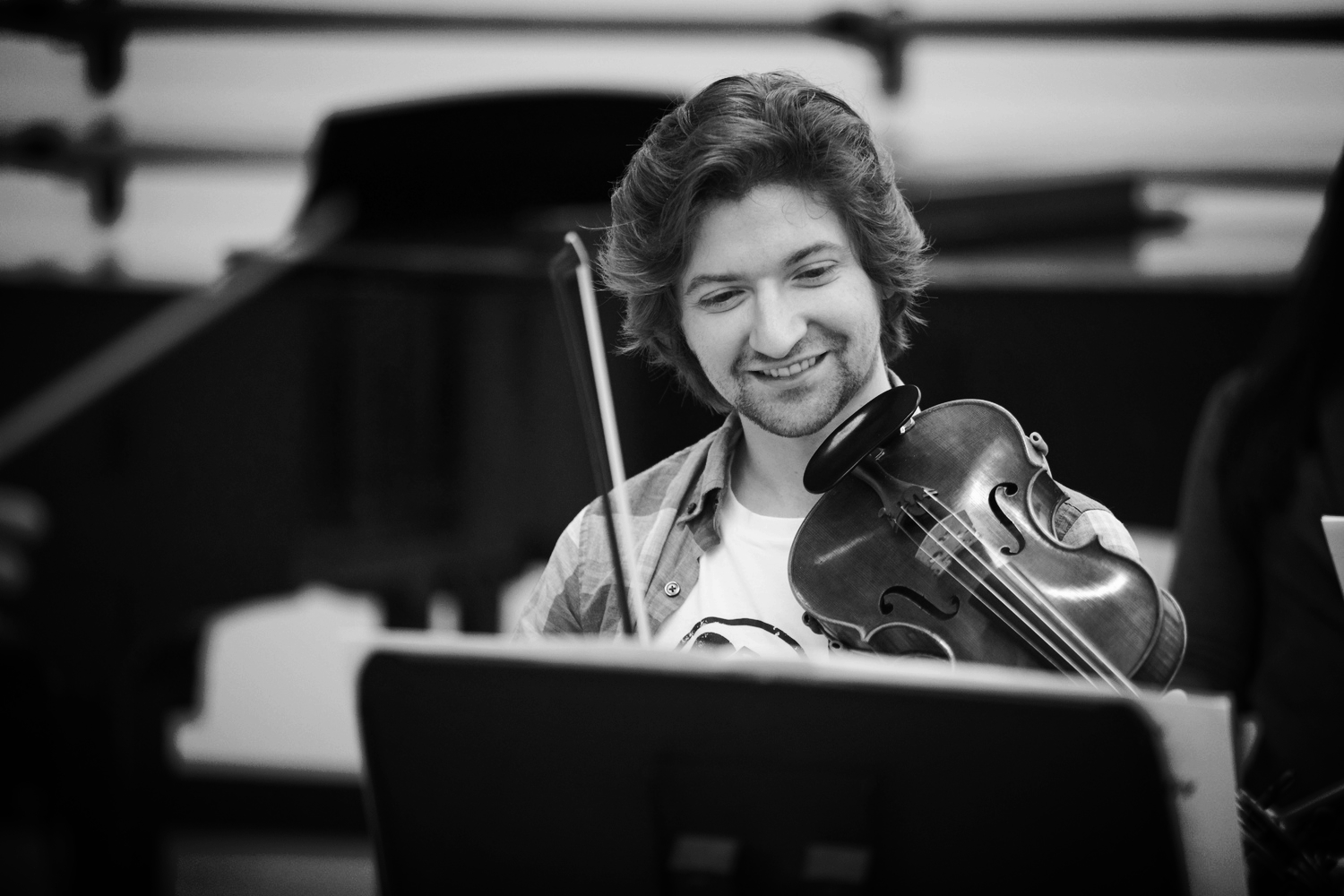 The night begins with a sense of humor: Carl Nielsen’s Serenata in vano (Serenade in Vain) depicts a suitor’s attempt to seduce a loved one outside a balcony. When she fails to materialize, the musicians conclude with a jovial march homeward. To round out the evening’s program, Brahms and Schubert are paired together. Legendary pedagogue and Festival faculty artist Almita Vamos performs Brahms’s final Violin Sonata. The concert continues with Schubert’s “Trout” Quintet, one of the composer’s most lyrical and exuberant chamber works.

Although Carl Nielsen, Denmark’s best-known composer, is particularly famed for his cycle of six symphonies, he had a remarkably prolific career, including a substantial output of operas and songs, concerti, and incidental music. He composed Serenata in vano just before embarking upon his Symphony No. 4 – a dramatic composition set against the contextual backdrop of World War One, and which could hardly seem more distant from this whimsical chamber piece.

Serenata in vano came about in short order: Nielsen’s good friend, composer and bassist Ludvig Hegner, was organising a chamber music tour featuring Beethoven’s Septet and sought an extra number to add to the program. He asked Nielsen for a contribution drawing from the Septet’s instrumentation, which resulted in the unusual quintet of instruments chosen by Nielsen for the serenade. A week before the tour began, another friend of Nielsen’s, Henrik Knudsen, saw a printed copy of the tour program. Unaware of any serenade composed by his friend, he asked Nielsen about it, saying “I don’t know that one”; Nielsen replied, “Nor do I.” Nevertheless, the work was planned, penned, and prepared in time for the premiere the following week in the Danish waterfront city of Nykøbing Falster, where the monthlong tour began.

“Serenata in vano is a humorous trifle. First the gentlemen play in a somewhat chivalric and showy manner to lure the fair one out onto the balcony, but she does not appear. Then they play in a slightly languorous strain (Poco adagio), but that hasn’t any effect either. Since they have played in vain (in vano), they don’t care a straw and shuffle off home to the strains of the little final march, which they play for their own amusement.”

In the summer of 1886, Brahms composed his second violin sonata in the beautiful town of Thun, a favorite holiday retreat outside Bern, Switzerland. Immediately after completing that sonata, he commenced sketches for a third violin sonata; the latter work, however, remained unfinished until a subsequent vacation in Thun in the summer of 1888, when Brahms resurrected the project. The completed work reflects Brahms’s maturity as a composer: by that time, Brahms had completed his four symphonies and his two piano concertos, and generally basked in the acclaim of fellow musicians. For this sonata, Brahms here adopts a four-movement structure, expanding upon that of his previous violin sonatas.

This sonata brings together two particularly important figures in Brahms’s musical network. The first of these is Joseph Joachim, the celebrated Hungarian violinist and longtime friend of the composer’s. Personally, Joachim and Brahms’s relationship was consistently turbulent over the decades of their acquaintance; musically, however, the two shared a mutual and enduring esteem, in spite of Brahms’s brash personality, and Joachim’s technique and performance profoundly shaped all three of Brahms’s sonatas, as well as his Violin Concerto (1878). The second figure is the sonata’s dedicatee, Hans von Bülow, the celebrated conductor and pianist. Bülow, who has become especially known for his championship of Wagner, was also a tireless proponent of Brahms’s symphonies and piano concertos, which he performed and conducted from the keyboard. It was Bülow who extolled Brahms in the highest possible terms, coining the expression “the three B’s” thus likening Bach, Beethoven, and Brahms to a musical Holy Trinity.

The “Trout” Quintet reminds us that during his lifetime, and even after, Schubert was best known as a composer of Lieder (songs) – a reputation which long prevented his many larger-scale works from being taken seriously. Schubert’s songwriting was indeed prodigious: he composed over 600 in his short lifetime, including over 300 between 1815 and 1817, often managing several in a day. His song “Die Forelle” (“The Trout”), composed in 1817, was instantly popular, apparently widely known throughout his hometown of Vienna. Perhaps part of its success was due to its sheer affability: the Lied begins with a delightful melody accompanied by a bubbly piano part for the first two verses, setting part of a poem written by Christian Friedrich Daniel Schubart in 1782, in which the narrator sees a fisherman attempting to catch a trout in a stream; the music turns somewhat darker for the third stanza, when the narrator sympathizes with the elusive fish as it is finally reeled in by the fisherman by his stirring the waters muddy.

In 1819, Schubert spent the summer away from Vienna in the town of Steyr, where he met Sylvester Paumgartner. Paumgartner, a patron and amateur cellist, regularly invited guests to his salon for chamber music sessions, and Schubert was a frequent visitor. Paumgartner, who was familiar with and keenly fond of “Die Forelle,” asked if Schubert would be willing to extrapolate the lied into a chamber work, and suggested Hummel’s Quintet of the same instrumentation (as yet unpublished) as a model. Schubert accepted the suggestion, composing a quintet that resembles a Classical serenade in its five-movement structure and lighthearted tone. He excerpted the first verse of the lied – the part before the fisherman manages to catch the trout – and expanded it into the Theme and Variations that became the Quintet’s fourth movement. In the final variation, he even incorporates the distinct, limpid sextuplet figurations from the piano part of the lied, which brings the movement to a delicate conclusion before the work’s contrasting, dance-like Finale.