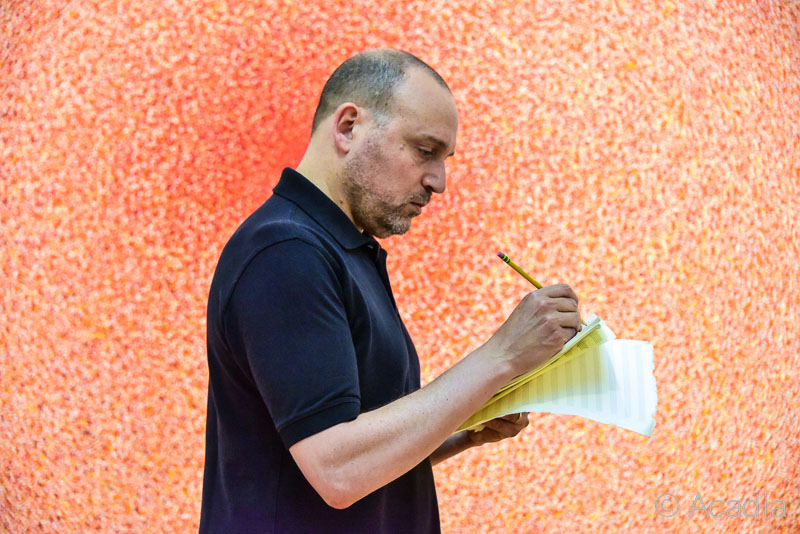 Derek Bermel’s Tied Shifts emerged from a month making and learning music alongside Bulgarian folk clarinetist Nikola Iliev. The title refers to the complex interplay of metre, rhythm, and stress that characterizes the Thracian style – and which, to the uninitiated listener, produces the effect of a music in constant flux. Framing Bermel’s work are two Viennese classics, composed at opposite ends of the nineteenth century.

“I must live like an exile,” Beethoven wrote in 1802, in a letter to his brothers that came to be known as the “Heiligenstadt Testament”. Named for the Viennese suburb where Beethoven’s doctor recommended he might seek some quiet in the countryside, the document contains the composer’s agonized admission of his increasing deafness, and of the emotional distress it caused him. “What a humiliation when one stood beside me and heard a flute in the distance and I heard nothing, or someone heard the shepherd singing and again I heard nothing. Such incidents brought me to the verge of despair, but little more and I would have put an end to my life,” he wrote. Beethoven’s shame in admitting his condition was so consuming that he never sent his brothers the letter, which was only discovered after his death, hidden among his papers. Yet the letter also bears witness to Beethoven’s sense of resolve amid these woes, to his belief that his art would sustain him even in the most difficult times.

The three violin sonatas, Op. 30, were composed at this threshold in Beethoven’s life. During this period, Beethoven sought strength and inspiration in the personalities of bold political figures – most famously, Napoleon, in the case of his rebaptized “Eroica” symphony – but also, Alexander I of Russia. Having become Tsar in 1801, Alexander led a brazen military incursion into Georgia, garnering himself a certain esteem across Europe. When Alexander visited Vienna in 1802, Beethoven angled to receive financial support from the Tsar by seeking permission to dedicate the three violin sonatas to him. Alexander, evidently appreciative, accepted the gift, but appeared not to catch the hint, and left Vienna without remunerating Beethoven for the works. Despite the heroic associations, this carefully measured sonata conveys a sense of tenderness above all, particularly in the graceful theme and variations of its Finale.

In August of 2001 I traveled to Plovdiv, Bulgaria to spend a month working with the great Bulgarian folk clarinetist Nikola Iliev. Fascinated by the melodies in odd meters executed at lightning speeds, I desired to gain firsthand knowledge of the Thracian folk style by learning to play the songs from a master musician. In transcribing melodies with compound meters – 5/8, 7/8, 9/8 (sometimes), 11/8, 13/8, 15/8, and combinations thereof – I was particularly struck by the practice of tying melodic notes over a barline, resulting in an obscuring of the meter. This process made it virtually impossible to guess the meter of a song simply by listening, as downbeats could conceivably be inaudible. Thus, though implied and felt, the odd metrics of a song could remain unstressed; the knowledge of the ‘base’ meter would be for players and familiar listeners alone. To make matters even more confusing to an uninitiated ear, tied notes were often decorated with mordents – I use the term generally designated for inflection similar to the baroque ornamentation – leaving the impression that the meter was in a state of constant flux, shifting with each passing measure. These impressions are those of a Western musician, and they became the points of departure for this piece. I attempted to fashion philosophical and physiological implications of the tied shifts into a work that structurally owes more to Westernthan to Thracian music.

Mordents occupy a central place in this piece, on both local and larger formal levels. The inflections generate their own material, and melodies are spawned from the contour of the rising mordent itself. The shape of all the melodic material stems from an obsessively repetitive cell, which rises to a mordent-inflected appoggiatura, then inches up farther, always clinging to its origin. I imagined this tension – manifest throughout the work – as a physical being determined to stretch itself, to explore the outer edges of its horizon, but continually finding itself snapped back, as if tethered by an invisible rubber band its place of origin.

Within the octatonic harmonic language of the first movement, I emphasize certain chords, notably a particular inversion of the ‘#9’ which forms the harmonic underpinning for several of my earlier pieces and which – though also derived from the same scale – would not be found in Bulgarian music. The second movement opens in a different harmonic world – a diatonic hymn, derived from the opening melodic material of the first movement. As the hymn is overlaid with a variation of the opening melodic material of the first movement, the two harmonic fields collide and the mordents and inflections often assume the quality of ‘blue’ notes. A second, mostly octatonic, hymn appears, this time in tight harmonic clusters typical of folksong settings rendered by Bulgarian women’s choirs.

During the writing process of Tied Shifts, I had considerable trouble deciding how to notate the agogic accents so that Western players would be able to negotiate the difficult rhythmic displacements most effectively. For their patience in considering several versions of the notation, I acknowledge the wonderfully competent and thorough musicians in eighth blackbird, for whom this piece was commissioned. Special thanks to Lisa Kaplan who initiated the collaboration, to the Greenwall Foundation and Yaddo for their support, and to Barbara Eliason, Daniel Nass, and Maggie Heskin, who provided invaluable assistance along the way. Tied Shifts was premiered by eighth blackbird in Columbus, Ohio on January 29, 2005.

At the age of 57, Brahms was undergoing feelings of creative fatigue – a worrisome sentiment for the lifelong perfectionist – and he began to contemplate retirement from composition. Unsatisfied with preliminary sketches for his planned fifth and sixth symphonies, Brahms resolved to write one final work: a second string quintet. His first quintet, Op. 88, had been one of his favorite works – when he published it, he wrote to his publisher, “you’ll never receive anything more beautiful from me” – and his close friend, virtuoso violinist Joseph Joachim, had been asking for a companion piece. So, spending the summer of 1890 at the Austrian spa town of Bad Ischl, Brahms sought to pour all his remaining energies into the work.

Despite the poignant circumstances, Brahms sought to strike a joyous tone, infusing the quintet with dance music and a sense of youth. Max Kalbeck, a music critic and friend of Brahms’s, suggested that the composer might nickname the work, “Brahms in the Prater,” recalling the name of the large and convivial park a stone’s throw from Brahms’s Viennese residence. (Brahms is said to have responded, “You’ve got it! And all the pretty girls!”) Another friend, pianist Elisabeth von Herzogenberg, wrote to Brahms: “Reading it was like feeling spring breezes … He who can invent all this must be in a happy frame of mind. It is the work of a man of thirty.”