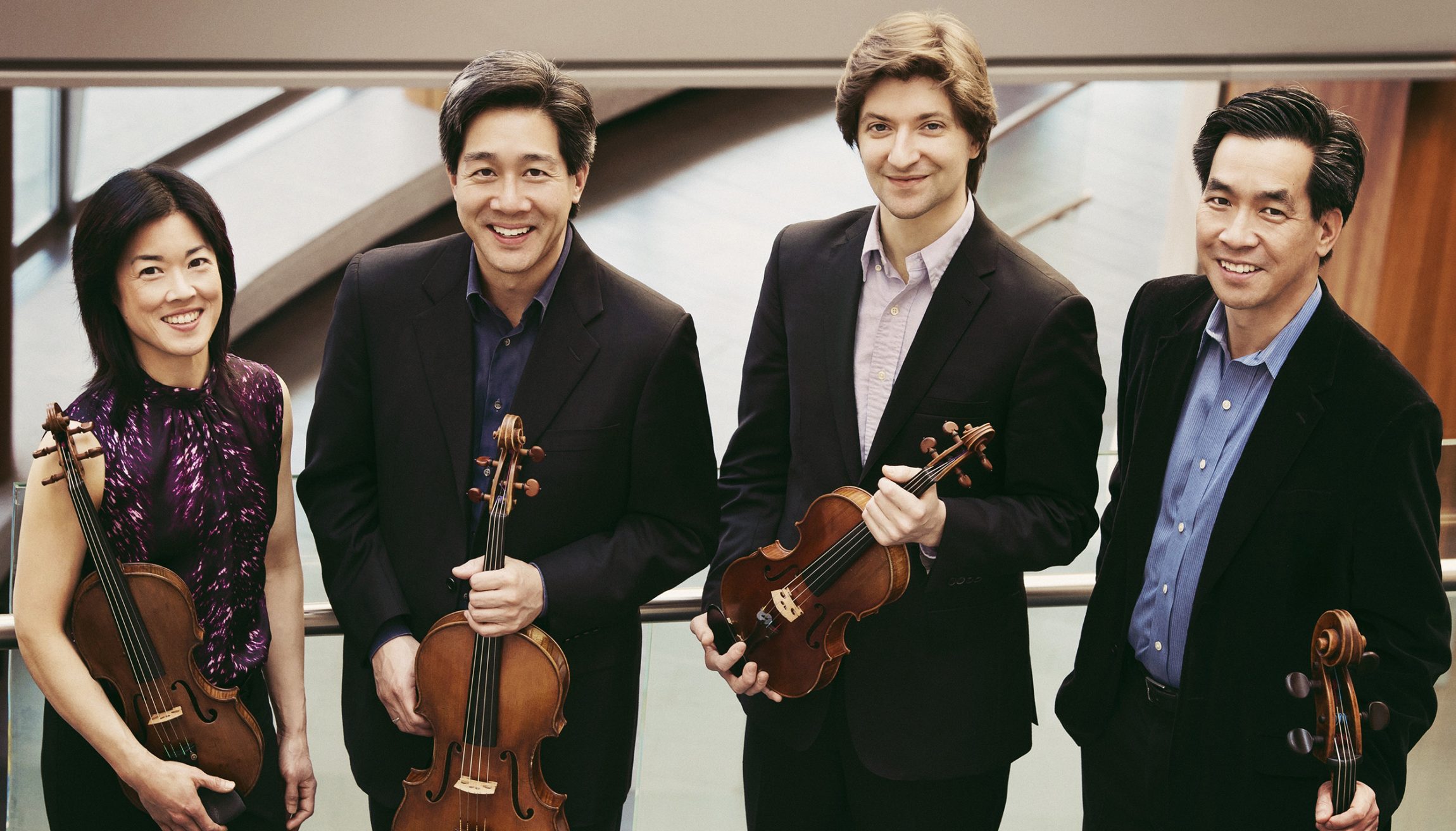 Opening their program with one of Mendelssohn’s early quartets, the ensemble then travels to Italy. First, they bring to life one of Puccini’s rare chamber music gems: better known for his contributions to the Italian stage, Puccini wrote the elegiac Crisantemi (Chrysanthemums) in response to the death of his friend, the Duke of Savoy. Then, Hugo Wolf, a composer famed for his song settings, creates an Italian melody for quartet in his exquisite Serenade. After the intermission, bassist Kurt Muroki joins the party for Dvořák’s String Quintet, dedicated “to my nation”.

1829 was a busy year for Felix Mendelssohn. Having celebrated his twentieth birthday in February, Mendelssohn was preparing a centenary performance of Bach’s St. Matthew’s Passion, a performance which was instrumental in reviving interest in Bach among European audiences and musicians. He was also getting ready to embark his first tour of Britain, where he conducted his first Symphony and his Overture to A Midsummer Night’s Dream, performed Beethoven’s “Emperor” Concerto as soloist, and was commissioned to write an opera for Covent Garden (although this never materialised). The tour was a musical and social whirlwind for young Mendelssohn, who wrote to his family: “It is fearful! It is mad! I am quite giddy and confused! London is the grandest and most complicated monster on the face of the earth.” Even so, Mendelssohn endeared himself to Britain, and vice versa. The cosmopolitan life in the capital, plus the natural offerings of the Scottish highlands, provided ample musical inspiration to young Mendelssohn in 1829, and he returned across the Channel nine more times during his life.

It was during that first journey that Mendelssohn completed much of the work on his String Quartet Op. 12. Though it is designated “No. 1”, it was composed two years later than his String Quartet “No. 2” in A minor, Op. 13; even so, Mendelssohn was already an accomplished chamber music composer, having composed throughout his adolescence a handful of piano quartets, a quintet, a sextet, and the famous octet (to be performed on July 23). The pair of quartets were written in the years following the death of Beethoven, whose late quartets enchanted Mendelssohn and provided him a rich education in quartet composition; and both quartets exhibit experiments in “cyclic form”, with the first theme from the opening movement returning in the closing minutes of the Finale – a sort of musical homecoming.

Neither Giacomo Puccini nor Hugo Wolf are known for their chamber music. Wolf’s musical output is dominated by his 350 Lieder, which carry the song tradition of Schubert and Schumann into an era touched by Wagner. And Puccini, who made his fame as composer of such operatic favorites as La Bohème and Madama Butterfly, looked back on his life and declared himself “useless if I have no libretto”. Nevertheless, both Wolf and Puccini exceptionally composed one-movement miniatures for string quartet, which are paired together this evening.

Puccini composed Crisantemi as an elegy for Amadeo di Savoia, who died in 1890 at age 44. Amadeo had returned to Italy in 1873 after a fraught three-year reign as King of Spain, and had become a dear friend of the composer’s. In a letter to his brother, Puccini reported that he wrote the work in a single evening. The title (Italian for “chrysanthemums”) is taken from the traditional Italian symbol for mourning, and Puccini would later reuse the quartet’s poignant opening theme in Act IV of his opera Manon Lescaut, in which the ailing Manon prepares for her death.

Wolf’s sunny Italian Serenade was written during a period of compositional zeal over three days in May 1887. While much of Wolf’s life and career were marked by struggle, frustration, and uncertainty, the spring of that year had begun optimistically. Wolf was working on a number of lighthearted songs upon the poetry of Joseph Freiherr von Eichendorff, and he had just decided, in this moment of creative confidence, to quit his post as music critic for the Wiener Salonblatt. Wolf’s buoyancy was short-lived, however: a few days after he completed the Italian Serenade, he received the devastating news of his father’s death, and found himself unable to compose for the rest of the year.

The first page of the manuscript for Dvořák’s String Quintet No. 2 reads in large lettering, “Svému národu” – “For my nation”. Nationhood was famously important to Dvořák, whose incorporation of elements of Czech folk music in his composition had earned him the admiration of the Austrian musical establishment; Dvořák never abandoned his national allegiance even as his career and fame grew internationally.

Dvořák composed his String Quintet No. 2 in 1875, and submitted it to a competition organised by Umělecká beseda, a Prague-based artists’ forum, in which he won first prize. However, a more pivotal milestone came that same year when Dvořák was for the first time awarded an Austrian State Stipendium. This award opened new professional doors for Dvořák, not least because Johannes Brahms was among the panelists. Brahms became a powerful advocate for the younger composer, putting in a good word with his publisher, Fritz Simrock, who in turn helped to popularise Dvořák’s work abroad.

Although Dvořák was thirty-two years old when he composed the Quintet, it is a relatively early work in his career, originally designated Op. 18. Despite the accolades the work received when it was written – particularly with respect to its unusual and rich instrumentation – he left it unpublished. It was over a decade later that Dvořák, having become internationally famous, found himself under pressure to meet publishing demands. He polished a number of earlier compositions, including the Quintet – which he tightened up by cutting one of its original five movements – and sent them off to Simrock, who published them the following year.