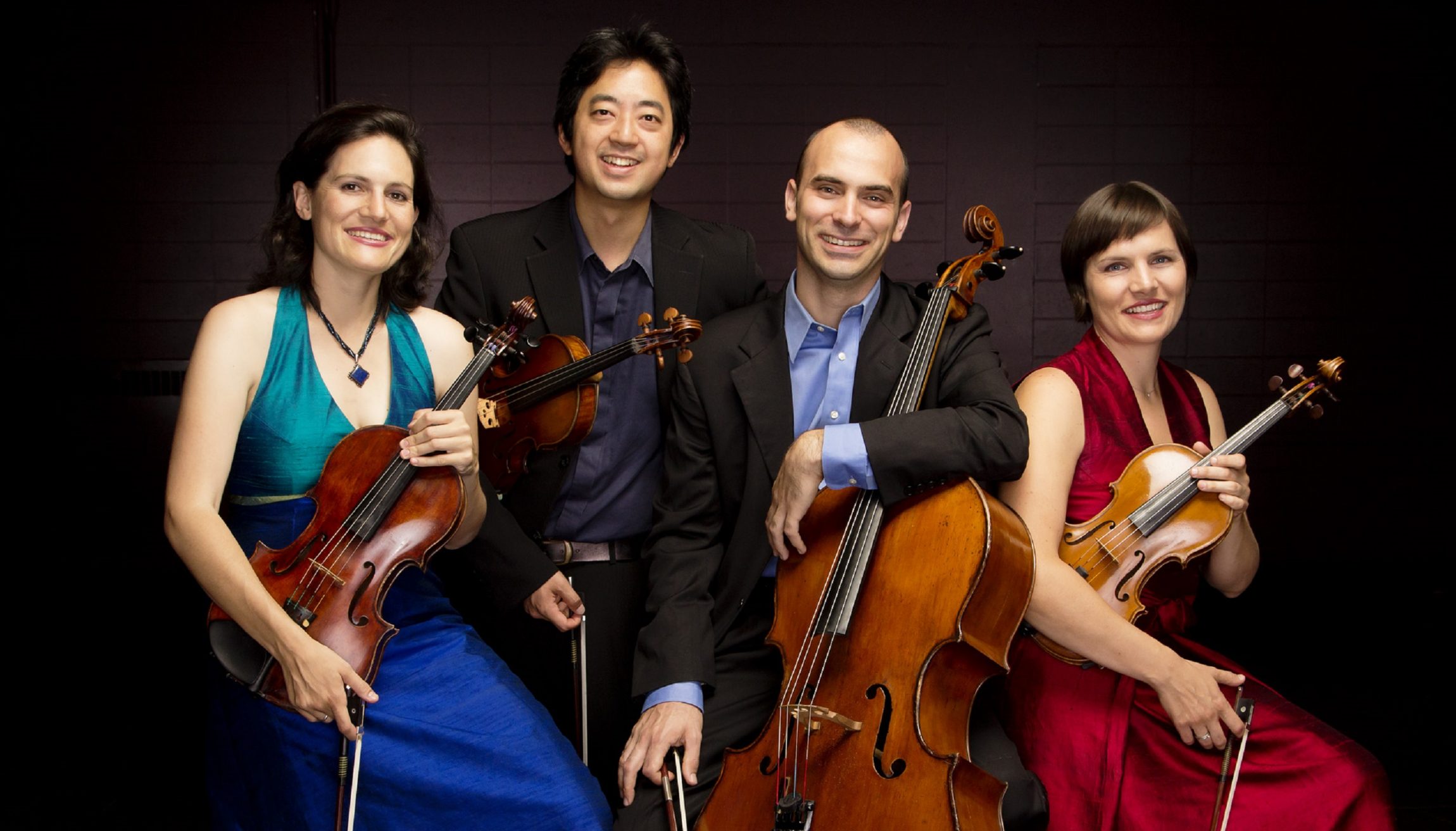 The Festival is delighted to welcome back the Jupiter String Quartet this season for their own concert program. Artists-in-residence at the University of Illinois, the Jupiter String Quartet maintains a busy touring schedule across the globe, and has performed complete Beethoven cycles at Aspen and at MIT. Tonight they share their interpretations of early and late Beethoven, and will be joined by pianist Elinor Freer for this season’s freshest composition: Pierre Jalbert’s Piano Quintet, just premiered by the Quartet in March 2017.

When Prince Lobkowitz commissioned Beethoven to compose a set of six string quartets in 1798, the task facing Beethoven was daunting. Beethoven, in his late twenties, had been making a name for himself since moving to Vienna in 1792. His skills as a virtuosic pianist and improviser were renowned, and he had achieved success as a composer with his early piano sonatas, concertos, and trios. Nevertheless, he had not tried his hand at a string quartet. That genre was inextricably associated with two of Vienna’s, and Beethoven’s, most revered musical idols: Haydn, who had essentially invented the form; and Mozart, who contributed greatly to its stylistic development. Beethoven, as a means of auto-erudition, had taken to painstakingly recopying Haydn and Mozart quartets, while composing his own string trios as a testing ground.

The Prince’s commission therefore represented a formidable opportunity for Beethoven to demonstrate his worthiness amid the legacy of the elder generation. To that end, Beethoven took his time completing the set, revising his manuscripts carefully. When he was finally ready to publish them two years later, he asked his friend, Karl Amenda, to suppress an earlier version of one of the set. “I have greatly changed it,” Beethoven wrote, “having only just learned how to write quartets properly.”

Beethoven also took care to arrange the set to his liking, such that the quartets’ numeration does not reflect the order of their composition. The quartet performed this evening, although published as Op. 18, No. 2, is thought to have actually been written third, or perhaps fifth. In either case, this quartet, like the others, demonstrates Beethoven’s debt to Haydn and Classical Viennese style. In particular, it has earned the nickname of the “Komplimentierquartett” (“Compliment Quartet”), referring to the formal bowing and curtseying of dance partners in the traditional Viennese ballroom.

Pierre Jalbert’s Piano Quintet was premiered in March of this year by the Jupiter String Quartet. The composer has provided the following program note to accompany the work:

“My Piano Quintet contains four movements of contrasting character. The first movement, “Mannheim Rocket,” contains rapidly ascending scalar figures, inspired by the 18th-century orchestral practice, but with modern materials. The music eventually launches into space with high sustained string harmonics. The second movement, “Kyrie,” takes its inspiration from Gregorian chant as imagined in a large cathedral. The Scherzo uses the traditional Scherzo/Trio form and a kind of call/response between the piano and strings. The final movement, “Pulse,” uses constant eighth-note motion to build longer phrase structures as it pushes relentlessly toward the end.”

Beethoven’s String Quartet Op. 127, heard this evening alongside the Op. 18 quartet but composed over 25 years later, demonstrates the radical evolution in Beethoven’s compositional, and quartet-writing, style. In the traditional periodization of Beethoven’s oeuvre, Op. 127 is considered the first of the five “Late” Quartets, the works which largely occupied Beethoven for the final three years of his life.

In November 1822, Beethoven received a letter from St. Petersburg: Prince Nikolai Golitsyn, a Russian patron and cellist, wrote, “Being as passionate an amateur of music as an admirer of your talent, I am taking the liberty of writing to you to ask you if you would be willing to compose one, two or three new Quartets, for which trouble I shall take pleasure in paying you whatever amount you would deem appropriate.” By then, it had been over a decade since Beethoven had last written a quartet (the “Serioso,” Op. 95) and it is possible that, were it not for the Prince’s missive, Beethoven would not have returned to the form. Beethoven accepted the commission at the price of 50 ducats per quartet, although his work on the Ninth Symphony and the Missa Solemnis prevented him from setting pen to paper for another two years.

The extensive experimentation in Beethoven’s late style rendered – and continues to render – performance of the Late Quartets exceedingly difficult. The premiere of Op. 127 was undertaken by Ignaz Schuppanzigh and his quartet. Schuppanzigh, generally credited with forming the first professional string quartet, had premiered many of Beethoven’s quartets in the past, including the Op. 18 set and the Razumovsky Quartets, Op. 59. The premiere performance of Op. 127, however, was apparently poorly rehearsed and negatively received, thus drawing Beethoven’s ire. The composer lashed out at Schuppanzigh, cruelly blaming the failure on the violinist’s obesity, and engaging a quartet led by Joseph Böhm to prepare a more successful follow-up performance. The relationship was eventually repaired, as Schuppanzigh’s Quartet later gave commendable premieres of the two subsequent Golitsyn quartets.